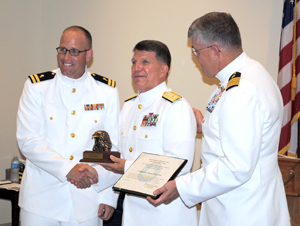 FORT JACKSON, S.C.—Navy Chaplain Brian D. Gibbons was awarded the Captain Stanley J. Beach, CHC, USN Student Leadership Award, an honor given to the Navy Chaplains School graduate who most exhibits exceptional potential for leadership in ministry. The award is presented by Navy Chief of Chaplains Robert F. Burt, CHC, and by Capt. Michael W. Langston, commanding officer of the Naval Chaplaincy School and Center located at the Armed Forces Chaplaincy Center in Fort Jackson S.C. Chaplain John Murdoch, director of Regular Baptist Chaplaincy Ministries and endorser for the GARBC, had the privilege of attending the graduation ceremony for Chaplain Gibbons, who will begin his tour of duty in September as a Navy chaplain with a Marine unit at Twentynine Palms, Calif. Chaplain Gibbons the newest GARBC active duty chaplain in the Navy. He was born in Canton, Ohio, and is a member of Calvary Baptist Church, Moffitt Heights, Ohio. Calvary Baptist ordained him and has sent him out as its representative to the Chaplaincy. Chaplain Gibbons, a combat veteran, has prior service with the Marine Corps as an enlisted soldier and officer. He has undergraduate and graduate degrees from Bob Jones University and a Masters from Southwestern Baptist Theological Seminary, Forth Worth, Texas.  He married his wife, Heather, in 1999. 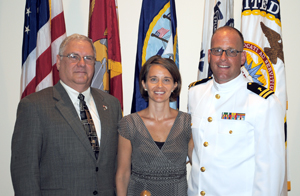 “Please pray for the Gibbons family as they begin a new phase of military service with the Chaplain Corps of the United States Navy,” Chaplain John Murdoch says. The leader award is named for Capt. Stanley J. Beach, a GARBC-endorsed chaplain who served with the U.S. Navy 27 years (1960–1987). Now retired and living in Leesburg, Fla., Chaplain Beach was formerly the director of the Navy Chaplain School (1982–1985), then located in Rhode Island. The 2010 presentation marks the first time a GARBC-endorsed chaplain has received the award. “His godly influence is still being felt in the Navy today,” John Murdoch says of Chaplain Beach.
Posted in Featured Stories, GARBC News, News on September 15, 2010.