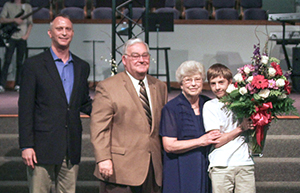 TOLEDO, Ohio—The 49-year ministry journey of Bruce and Ellen Snyder has taken them to various locations, but it begins and ends at Emmanuel Baptist Church. On June 22 Bruce Snyder retired from Emmanuel Baptist, where he was an associate pastor since January 1965.

Bruce Snyder initially served under Pastor Don Sewell as youth, music, and worship pastor and assisted in visitation. In 1967 Snyder served on a steering committee with the vision of starting a Christian school at Emmanuel. That fall Emmanuel Christian School began with 13 kindergarten students. Snyder served as principal that year. Today nearly 400 students in kindergarten through 12th grade attend the school, which has been accredited by the Association of Christian Schools International.

In November 1968 he was called to pastor a church in Indiana, and in 1970 he moved his family to Elida, Ohio, to start a new church. In 1975 he returned to Emmanuel at Pastor Sewell’s request to head up a new internship program for seminary students.

When Sewell left the church in August 1977, the members asked Snyder to become interim pastor. He served until Dr. Ernest Pickering was called as pastor in September 1978. During these years, Ellen became the home economics teacher for Emmanuel Christian’s high school students. She had previously been a permanent substitute elementary teacher at the school.

With Pickering in the pastorate, Snyder continued to serve as administrative pastor until November 1983, when he accepted the pastorate of Maranatha Baptist Church, Columbus, Ohio. Later he pastored a church in Idaho, and then First Baptist Church, Horseheads, N.Y., until his retirement in August 2003.

Retirement, however, didn’t curtail Snyder’s desire to minister. He and Ellen moved back to Toledo, and he was asked to become pastor to the senior citizens. Once again he was added to Emmanuel’s pastoral staff. Then, once again, he served as interim pastor from 2007 to 2009.

“Pastor Snyder and Ellen have followed their Savior, serving in many capacities, with a willing spirit, and always glorifying their Savior, Who they love so dearly,” says Emmanuel Baptist Church, now pastored by Duke Crawford. “We are not saying good-bye to them, because they will continue to worship at Emmanuel, and we know that they will continue to serve where they can.”