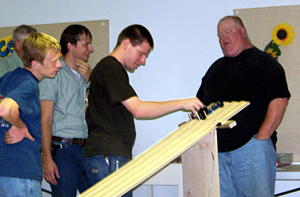 KANSAS CITY, Kan.—After years of “helping” their children build pine cars for the annual Awana Grand Prix, a group of men decided to stage their own “men only” event at Fair Haven Baptist Church in Kansas City, Kan.

The church started the event a year ago as a men’s outreach opportunity to reach out to their community. This year Fair Haven hosted its second annual race with even more men participating. With many in the church already interested in auto racing, the men of the church thought it might be a fun and interesting way to reach out to others with similar interests. Real cars are too expensive, but with so many churches already owning pine car derby tracks, it was easy to borrow the needed equipment.

Racers were divided into two vehicle categories: “Classified” cars that strictly follow the official Awana rules, and “Unclassified” outlaw cars with a host of vehicle modifications, more of a free-for-all event.

The event also hosted a devotional between the two races, as well as free food from a concession stand typically found at a race, including hotdogs, nachos, soda, and candy. Already the men are talking about next year’s race!