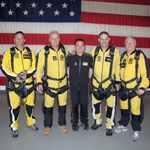 Ft. Bragg, N.C.—On a visit with Chaplain Jack Stumme Chaplain John Murdoch had the opportunity to participate in a tandem jump with the U.S. Army’s Golden Knights Parachute Team. The 82nd Airborne Division at Ft. Bragg is the largest parachute force in the free world. Its mission is to conduct forcible entry parachute assault in response to any contingency. Fifty years ago the Army assigned some of its best paratroopers to be the U.S. Army Parachute Team, the Golden Knights. Since then they have been regularly thrilling audiences at air shows, football games, and other special events to support Army recruiting goals. Applicants for the Golden Knights must be Active Duty Army, have over 100 freefall jumps, have a flawless military and civilian record, and be Airborne qualified. Many are combat veterans. The Golden Knights now have two demonstration teams that travel across the country to give public displays, and two competition teams that compete nationally and internationally. Regularly winning gold, silver, and bronze medals, the Golden Knights have won more events than any other U.S. Department of Defense sports team. A tandem team seeks to make the Army and the sport of skydiving more personal to individuals. It “enables the Army to reach out to influential citizens and give them a taste of the professionalism, leadership and teamwork that is involved in giving them a tandem,” says Lt. Colonel Anthony Dill, commander of the Golden Knights. Chaplain Murdoch was the beneficiary of that professionalism, leadership, and teamwork when he was invited to take the tandem jump. “What an experience!” he says. “Two and a half miles up and out you go! It was great!”