With the recent Hollywood success of War Room as a #1 movie, I see no reason why Woodlawn will not be a huge hit too. The main character, Hank Erwin Jr., is played by Sean Astin, who is best known from his role as Samwise Gamgee in The Lord of the Rings. Moviegoers will also know him as Rudy in the movie by the same name. Woodlawn has a wonderful storyline with compelling subplots and superb acting. 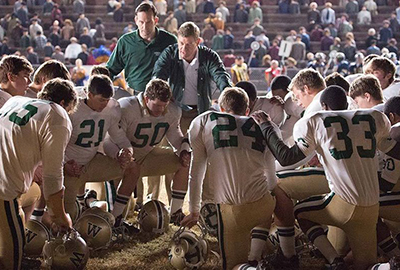 With the recent Hollywood success of War Room as a #1 movie, I see no reason why Woodlawn will not be a huge hit too. The main character, Hank Erwin Jr., is played by Sean Astin, who is best known from his role as Samwise Gamgee in The Lord of the Rings. Moviegoers will also know him as Rudy in the movie by the same name. Woodlawn has a wonderful storyline with compelling subplots and superb acting.

When my wife and I went to a special preview screening for pastors back in August, we had no idea that the movie was based upon former Senator Erwin’s life. I have had several opportunities to meet and talk with Mr. Erwin, having lived in Alabama where our children attended the same homeschool covering organization. We were thrilled to see these young men honor their father, who truly is a godly man, humble yet courageous in his Christian faith.

Some will liken Woodlawn to Remember the Titans, but this movie is different in that it is primarily about the power of Christ working through a faithful, bold chaplain named Hank Erwin, the father of the movie-makers the Erwin Brothers (Jon and Andrew), who produced October Baby in 2011. These sons wanted to tell the true story of their father’s life during this period of time.

Having lived and worked in the Birmingham area for many years, I was impacted by the raw portrayal of the evil of racism in this movie, by the hope of the gospel, and by the humility of those who trust in Christ to move His Kingdom purposes forward in spite of a growing hatred toward anything Christian. The movie’s setting begins in the 1970s at a time where children were being “bussed” across town to a new school in order to desegregate “whites and blacks” in public schools. The problem is that neither group was thrilled to be brought together in this way, creating more tension and unrest in the school. It was a time where the community was looking for “something bigger” than themselves to bring them together, and some thought football would be that “something bigger.” But we know that only Christ offers a new hope, true unity, and that He alone is that “something bigger” every person is searching for.

“I want you to stop all religious activity until this Board has time for a full review,” is what Woodlawn High School football coach, Tandy Geralds, was told by his superiors at one point in the movie when the faith of the students moves into the public square. The movie displays the tension of racism as well as religion at Woodlawn High School. Amidst the hatred and lingering racism of the 1970s in Birmingham, Alabama, God starts a historic revival that the movie details with riveting relationships that cross barriers often difficult to overcome, but not too difficult for Christ to overcome. In the Gospels, Jesus crossed all sorts of barriers with the poor, women, Samaritans, and the outcast by His love. It is this same love of Christ that is manifested before our eyes in this film.

What I appreciate about this movie is how they portray Christianity in an honest yet winsome manner. I hope unbelievers have a chance to watch this movie for that very reason. When we think about the power of racist hatred displayed in our country today, there really is only one unifying force greater than that hatred and those fears: the perfect love of Christ as outlined in 1 John 4:18-21 below:

There is no fear in love; but perfect love casts out fear, because fear involves torment. But he who fears has not been made perfect in love. We love Him because He first loved us. If someone says, “I love God,” and hates his brother, he is a liar; for he who does not love his brother whom he has seen, how can he love God whom he has not seen?

Woodlawn portrays brotherly love quite well, and I recommend this movie with 4.9 stars out of 5.0 (no movie is perfect). I pray Christians would support this movie and send a powerful message to Hollywood that we are tired of trash and longing for godliness to be demonstrated before our eyes.

I don’t want to give the movie away, so I won’t go into specifics, but there are many humorous and delightful moments in Woodlawn!

On a personal note, I worked for about two years right across the street from Woodlawn High School at Christ Health Center, a medical clinic that offered Biblical counseling through Truth in Love Ministries, the organization I founded in 2007. During that time, I saw the high school building each day I went to serve there, but didn’t know the full story of what was depicted in the movie. Now, my prayer is that the same type of revival that occurred in the movie will happen in that area of Birmingham through the local churches there because the area has been plagued by evil, lawlessness, crime, poor leadership, broken homes, and the like. The church has an opportunity to reach the community around it with the love of Christ. I believe God will use this film to reach many hearts. With football being such an important aspect in the lives of Alabamians, maybe the draw of this movie as a football movie will appeal to those who might not otherwise watch a so-called “Christian” movie.

One more memory to share: I remember when my wife told me that the Erwin brothers spoke to a crowd of students and parents at our homeschool group at the beginning of one particular school year to show their current video production work. It was a short, patriotic film. The brothers said they wanted to inspire others to pursue big dreams and to offer to teach them their trade. The quality of their patriotic video production presented at that meeting was phenomenal, especially knowing their young age (they had just recently graduated). These young men are gifted by the Lord and excelling at their craft. It is a joy to see and I hope you will support them. Because of its compelling story, you will enjoy this movie even if you are not a football fan!

Mark Shaw is pastor and executive director of Vision of Hope, a treatment center ministry of Faith Church, Lafayette, Ind. He has 22 years of counseling experience working in a variety of settings, including faith-based residential programs, dealing with issues surrounding addictions of all types, and supervising staff positions. This article has been reprinted by permission from Vision of Hope’s blog.