World News Feb. 26: Tim Tebow has backed out of speaking at First Baptist Church of Dallas, saying he "needed to lay low and steer clear of controversy." Read more about this and other news. 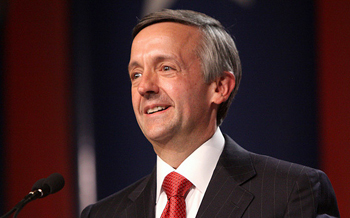 Tim Tebow has backed out of speaking at First Baptist Church of Dallas in April, saying he “needed to lay low and steer clear of controversy” because of both personal and professional issues. The NFL star informed Robert Jeffress, pastor of First Baptist, in a telephone call, Jeffress told The Christian Post. Prior to the decision, critics of Jeffress’ Biblical views on other religions and homosexuality argued that Tebow shouldn’t make an appearance at the church. After their phone conversation, however, the evangelical quarterback sent Jeffress a text message saying that he was still prayerfully considering speaking to the 11,000-member church, though he later announced via his social media accounts that he had decided against it. “While I was looking forward to sharing a message of hope and Christ’s unconditional love with the faithful members of the historic First Baptist Church of Dallas in April, due to new information that has been brought to my attention, I have decided to cancel my upcoming appearance,” Tebow said via Twitter and Facebook on Thursday. Jeffress said he is not sure what Tebow meant by “new information.” During their conversations the football star even told Jeffress he might consider speaking to the First Baptist congregation at a later date. “I think the new information . . . is all the controversy in the media and criticizing of him for coming,” said Jeffress, who says the media has made both him and his church out to be anti-Semitic, anti-gay, and hate-filled. He calls such reports a “complete mischaracterization,” and says his beliefs, specifically regarding the exclusivity of Christ as the way to salvation and marriage as being between one man and one woman, are not new. “Those are hardly radical ideas,” said Jeffress. “Those have been mainstream Christian teachings for 2,000 years, and I believe the reason these statements are so controversial is not because the Word of God has changed, but because culture has changed.” He also says Tebow never expressed any concerns about the church’s doctrine during their extensive conversations with one another. Christianity Today reports that sportswriters piled on Tebow. Benjamin Hochman of the The Denver Post warned, “After a season on the sidelines, the ball’s in your hands, Timmy. Better not fumble this one.” But R. Albert Mohler, calling the incident “Tebow’s Big Fumble,” warned in CT, “If Tebow meant to mollify his critics, it is not likely to work for long.” CT notes, “The Tebow controversy comes just weeks after evangelical pastor Louie Giglio withdrew from delivering a prayer at President Barack Obama’s second inaugural ceremony. Giglio had been ‘outed’ as having preached a message almost 20 years ago that affirmed the sinfulness of homosexuality and stressed that the ‘only way out of a homosexual lifestyle . . . is through the healing power of Jesus.'”