“Shades of Gray” Morality in a Black-and-White World

At least theoretically, we are living in a culture governed by moral relativism. The old codes of right and wrong are no longer seen by the general populace to apply. 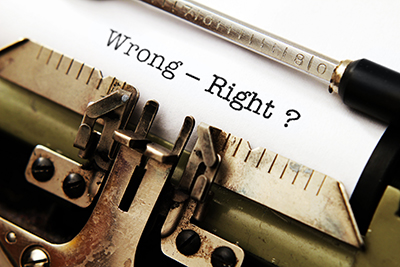 At least theoretically, we are living in a culture governed by moral relativism. The old codes of right and wrong are no longer seen by the general populace to apply. Talk of sin and judgment these days is sure to elicit either sneering condescension or indignant outrage. Two decades ago, Cornelius Plantinga described this moral climate well:

“Anyone who tries to recover the knowledge of sin these days must overcome long odds. To put it mildly, modern consciousness does not encourage moral reproach; in particular, it does not encourage self-reproach. Preachers mumble about sin. The other traditional custodians of moral awareness often ignore, trivialize, or evade it. . . . The word sin . . . now finds its home mostly on dessert menus. ‘Peanut Butter Bings’ and ‘Chocolate Challenge’ are sinful; lying is not. The new measure for sin is caloric.”[1]

The intervening 20 years have not dulled the force of Plantinga’s critique; if anything, it is even truer today than it was in 1995. Ethical discourse in 21st century America is strewn with preening, sanctimonious platitudes like “my body, my choice” and “that’s just your opinion” and “stop trying to legislate morality.” In short, moral relativism. What’s true for you needn’t be true for me, and vice versa. If you should choose voluntarily to bind yourself to a constricting code of ethics, that’s your business; but just try imposing that same code of ethics on me and you’ll soon feel the full force of my wrath—possibly my lawyer’s too. Moral absolutes are passé, moral preaching is hate speech, and anything less than total open-mindedness is anathema.[2]

In responding to moral relativism, many philosophers and theologians have noted that the position is self-referentially incoherent and therefore ultimately meaningless.[3] The statement “there are no absolutes” is itself an absolute. It thus collapses under its own weight. Or, put differently, if the statement “everything is relative” is true, then the statement itself (being a constituent of “everything”) must also be relative, and therefore false at least some of the time. The position is self-defeating.

This criticism is sound and, in my opinion, totally devastating to moral relativism. But it is also very abstract and therefore unlikely to sway those who find such reasoning abstruse. I find it helpful, therefore, to advance a second critique of moral relativism: it isn’t consistently liveable. The most committed moral relativist will quickly abandon his relativism the moment his own rights are trampled on. C. S. Lewis put it cogently:

Whenever you find a man who says he does not believe in a real Right and Wrong, you will find the same man going back on this a moment later. He may break his promise to you, but if you try breaking one to him he will be complaining “It’s not fair” before you can say Jack Robinson. A nation may say treaties do not matter; but then, next minute, they spoil their case by saying that the particular treaty they want to break was an unfair one. But if treaties do not matter, and if there is no such thing as Right and Wrong—in other words, if there is no Law of Nature—what is the difference between a fair treaty and an unfair one? Have they not let the cat out of the bag and shown that, whatever they say, they really know the Law of Nature just like anyone else?[4]

It seems to me that several recent news stories are indicative of this. They demonstrate that no matter how desperately we may want morality to be a matter of gradients and continuums, we just can’t help but act like it really is a matter of crisp blacks and stark whites. We are, at bottom, incurably moralizing people; we just don’t like to be moralized at ourselves.

First was the Brian Williams scandal that broke last month. Twelve years after Williams’s actual coverage of the Iraq war took place, inconsistencies in his reporting began to surface. Specifically, his prior claims that he had been in a military helicopter that received enemy fire was contested; it seems instead that a different helicopter, flying 30 minutes ahead of Williams’s, was the one that came under fire. As a result of this revelation, Williams publicly recanted his version of the events in question and was placed on a six-month suspension without pay.

Although the misrepresentation in question seems relatively minor in the grand scheme of things, it is instructive to note how seriously the journalistic misstep was taken, not only by NBC News but also by the public. The regnant perception seems to be not that Williams committed an unintentional blunder, or even that he presented a version of events that is equally valid as any other version of the same events, since everything is relative, but rather that he committed a serious misdeed. Thus we see that when faced with the prospect of a respected newsperson consciously misrepresenting a sequence of events, people were inclined to affirm both the objective nature of the facts involved (what he had said was factually incorrect) and the objective nature of the moral duties violated (what he did was morally wrong). No situational ethicists rushed to Mr. Williams’s defense. No one tried to convince anyone else that what he said was “true for him but just not true for everyone else,” because at the end of the day, everyone knows innately that that line of reasoning is nonsensical.

The second scandal received much scanter media attention, but bore similar overtones to the Williams debacle. In late February, news broke that Robert McDonald, Veterans Affairs secretary, had falsely represented himself as having served in the Special Forces during an official trip to Los Angeles in January. Shortly after the story broke, McDonald apologized. “I have no excuse,” McDonald’s report read. “I was not in special forces.” Not long afterwards, I observed a raging debate on social media concerning the extent to which McDonald erred. Some argued that since he did indeed complete Ranger training prior to his assignment to the 82nd Airborne Division, his remarks constitute more an exaggeration than a flat-out lie. But notice what this line of defense assumes: it roots McDonald’s relative innocence in objective, historical facts. That is, it seems tacitly to concede that, had he never completed Ranger training in the first place, the statement really would have constituted a reprehensible lie and McDonald would have crossed a genuine (i.e., objective) moral line.

The third scandal has absolutely dominated headlines for the past few days. (Coincidentally, liberal media outlets have been much quicker to find replacement headlines than have conservative ones.) It has come to light that Hillary Clinton not only used her personal e-mail account to conduct official business as secretary of state, but also that she even had her own private e-mail server installed to run the system. This has ignited a firestorm of controversy.

But why? If moral values and duties really are relative, then what difference at this point does it make? Why should it matter that Mrs. Clinton did the very thing that she criticized Bush officials for doing as a senator in 2007? Or that her actions violated an official state department memo bearing her own name that instructed state department employees to “avoid conducting official Department business from your personal email accounts”? After all, aren’t her critics just trying to force their own codes of morality on the former secretary? Shouldn’t we all just tolerate Hillary’s actions instead of judging them? Wouldn’t it be closed-minded not to?

Indeed it would, and that’s precisely the point. We are all fundamentally intolerant of others’ moral transgressions. When it comes to our own transgressions, we are quick to equivocate and backpedal and multiply excuses ad infinitum (notice how Brian Williams chalked up his erroneous reporting to “misremembering,” Secretary McDonald labeled his lie a “misstatement,” and Hillary Clinton insisted that her decision to use a private e-mail account just “didn’t seem like an issue”). But we will not tolerate the misdeeds of others. And that intolerance bears silent witness to the fact that moral relativism is epistemologically bankrupt. It testifies to the existence of a transcendent, personal, holy God without Whom objective moral values and duties could not exist.[5] And it shows us up for the phonies we are: madmen searching furiously for shades of gray in a world that, in the final analysis, is just plain old black and white.

[2] The irony in the last point is palpable, but lost on many.