Reflections on My Son’s Adoption

By adopting their son, two parents found that they were imitating the glorious actions of our God and Savior, Who marvelously saved us, washed us, rescued us, and adopted us into His family. 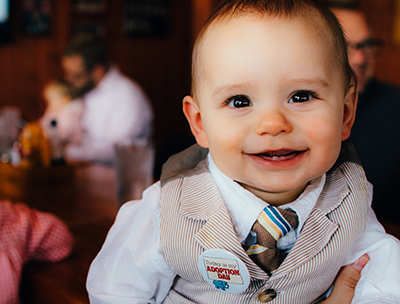 I love Mondays. In the opinion of the average person, that admission makes me worthy of a psychological examination! Let me explain: Mondays are my day off, so they are much more enjoyable for me than for most. I’ll never forget a Monday morning in the spring of 2014. Liz and I were off to a typical slow morning of sleeping in, coffee, and a little brunch when my phone rang. I finished grinding my morning brew and answered the call identified as “DHS.” I knew what that meant. The Department of Human Services was calling us about a foster care placement. We had taken many such calls in the past, and the majority hadn’t work out.

In 2013 we received a call and took a placement, but after two months had to surrender the baby girl who had become part of our family. Foster care and adoption are things that more Christians should engage in, but there’s no denying the potential for heartache. As the phone rang, memories of losing that little girl flashed through my mind. Liz’s busy season as an accompanist at Drake University was gearing up. Our church was in the midst of pulling off a capital campaign. Between rings of the phone I was already talking myself out of taking another foster placement. However, by God’s grace and the Spirit’s strong guidance, three hours later we were picking up a three-day-old, drug-affected baby boy from the hospital downtown.

Looking back on the scenario, I’m not sure why we accepted the placement. Although he had been affected by drugs, DHS told us that both his mom and dad would want to be part of his life. We were gearing up for four to five days per week of visits between the two parents. Typically we like to take “safer” placements than this. Thankfully, by God’s grace, none of the visits materialized.

Soon we learned that Dad was a vapor in the wind, and Mom had legal troubles. As the months passed, Baby (as we called him) had wormed his way into our hearts. He was our son regardless of what the legal system had to say. For many people, this process is like running a cross-country race: obstacles, hindrances, rough terrain, and a lengthy journey. In the case of this placement, the process became more like an Olympic 100-meter sprint: fast, expeditious, and obstacle-free. Our adoption attorney thought we could probably adopt Baby soon after the required six-month window expired. Nearly eight months after picking him up from the hospital, our adoption day was scheduled for Nov. 6, 2014.

If you’ve never been to an adoption hearing, add it to your bucket list. It’s worth it! Adoption hearings are one of the few times when a courtroom is filled with joy and happy anticipation instead of sadness and grim apprehension. Families and children are welcomed to attend; the court even provides toys to keep kids entertained during the process. Both Liz and I took the stand and “testified.” I put that in quotes because all we did was answer “yes” to about 20 questions.

There is no suspense at an adoption hearing because the ruling is a forgone conclusion. The hearing is simply a celebration of what is already true about this child: he is our son! On that day, “Baby” became Judah Michael Augsburger. This was our second adoption hearing, but some of the phrases and statements hit home again. Several times in the New Testament Paul uses “adoption” to describe our salvation. Strangely, the terminology used by the lawyers and judges in these hearings sounds Biblical. Read and reflect:

Freed from the damaging effects of generational sin. At this point you’re thinking, “Wow, that really does sound like Biblical language!” Well, that’s not an exact quote. I’m interpreting. The lawyer’s eyes actually welled up with tears as he said, “This case is rare. Many of the children who pass through this courthouse have emotional and even physical scars. They have been mistreated and abused and have seen horrendous atrocities. Not so with Judah. He’s been with you from birth. He has the unique advantage of being protected from what many children in the system are forced to endure.”

Wow, that’s sobering. Sin’s consequences are never individually isolated. Your sin impacts other people, especially your family! Exodus 34:7 says, “Visiting the iniquity of the fathers upon the children and the children’s children to the third and the fourth generation.” Now, I don’t think children pay the penalty for parents’ sin. I think this is talking about generational consequences. Our lives are shaped by the choices—good or bad—of our ancestors. In Judah’s case, however, he has been freed from many of those consequences. The same is true in our spiritual adoption. Though the gospel doesn’t erase our past choices or the choices of our ancestors, it does redeem us where we are and gives us the power to form a new identity based on our new family—God’s family!

No matter how you’ve been sinned against, no matter how your parents raised you or the abuse you experienced in your upbringing, you don’t have to let those things define you. You are now defined by a new Father and are part of a new family. And as far as God is concerned, the sins that were committed against you have been paid in full on the cross, giving you the newfound power to forgive. You don’t have to hold on to the debt. It’s been cleared!

This courtroom rests its case. At the end of an adoption hearing, the judge declares that there will no longer be any judicial action in the life of the child. The case is settled. This mirrors a beautiful spiritual reality. Romans 8:1 says, “There is therefore now no condemnation for those who are in Christ Jesus.” Because Jesus paid our sin-debt on the cross, the prosecuting attorney no longer has a case against us. In Christ we have committed no crime. If we accept the truth of Christ’s payment for our sins and trust in his applied righteousness, the righteous Judge of the universe looks at our record and sees nothing but perfect righteousness applied to our account.

All the rights and inheritances of a natural-born child. When the judge makes the adoption decree, he carefully and intentionally informs the courtroom that in the eyes of the law, this adopted child has the exact same relationship to the family as a natural-born child—even the right of inheritance! On Nov. 6 Judah became coheirs with Elijah to the vast estate I have accumulated on a pastor’s salary! ☺

Although Judah didn’t strike it rich by being adopted into our family, the statement is significant and has spiritual significance as well. When we are saved, we become heirs to the vast riches of our Heavenly Father. Romans 8:17 says, “And if children, then heirs—heirs of God and fellow heirs with Christ.” This goes far beyond a monetary inheritance. Ephesians 1:11 says, “In Him we have obtained an inheritance, having been predestined according to the purpose of Him who works all things according to the counsel of His will.” When will we receive this inheritance? Romans 8:23 tells us that part of this inheritance is eternal life in a redeemed body. This will happen after this life is over. Because of our adoption, we will live eternally, dwelling with our Father as co-owners of this planet. Thank You, Jesus!

The issuing of a new birth certificate. I have a copy of Judah’s former birth certificate. It has his given name, date of birth, biological parents’ names, and vital information. I’m keeping it just to have for records. Shortly after the adoption hearing, we received his “real” birth certificate in the mail. It lists his name, Judah Michael Augsburger; birth date; time of birth; and Liz and I as his parents. This is his real certificate. Now, in the future he could dig up his old certificate and choose to associate with his former identity. That would be tragic! He’s been rescued from that past and given a new identity, a new name, and a new family.

When God saves us, He likewise gives us a new name, a new identity, a new family, and a new spiritual birth certificate. According to Heavenly records, we were “born of God” through the Word and the Spirit. We do not have to be defined or identified by our past family or our past sins. First Corinthians 6:9–11 lists many categories of sinners, and then it makes this stunning statement: “And such were some of you. But you were washed, you were sanctified, you were justified in the name of the Lord Jesus Christ and by the Spirit of our God.”

Too many Christians choose to cling to their old birth certificates. They cling to old habits and struggle to move past the scars of past sin. In Christ and through our spiritual adoption, we each have a new birth certificate, and the Holy Spirit gives us the power to live out that new identity and to be free from past sins. You have a new family! Enjoy it!

In conclusion, Liz and I are eternally grateful for a Heavenly Father Who graciously allowed us to adopt Judah into our family. He is truly a blessing. But we are also keenly aware that by adopting Judah, we are simply imitating the glorious actions of our God and Savior, Who marvelously saved us, washed us, rescued us, and adopted us into His family.

If you’re reading this and you feel trapped by your past, or you are bitter at your parents or upbringing, there is victory in Christ and freedom through spiritual adoption. If you feel trapped or bitter, maybe you haven’t truly been adopted by God. Romans 10:13 says, “Whoever calls upon the name of the Lord shall be saved.” If you’ve never trusted Christ for salvation, I encourage you to believe that Jesus died to take your penalty. Accept the free gift of salvation. Call on the Lord and ask Him to save you. At that moment—just like Judah’s adoption in the courthouse—God will declare you part of his family and give you a new name, a new identity, and a new family. To God be the glory!