Polygamy, Other Aberrations Next to Be Legalized?

World News March 22: Redefining marriage to include same-sex couples would jettison the rationale and logic behind prohibitions on polygamous marriages, according to several friend-of-the court briefs. Read more about this and other news. 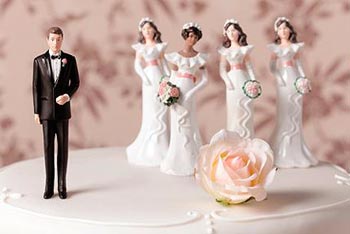 Redefining marriage to include same-sex couples would jettison the rationale and logic behind prohibitions on polygamous marriages, according to several friend-of-the court briefs urging the U.S. Supreme Court to uphold the traditional definition of marriage, Baptist Press reports. “Ultimately, there is no principled basis for recognizing a legality of same-sex marriage without simultaneously providing a basis for the legality of consensual polygamy or certain adult incestuous relationships,” reads one of the briefs, filed by the Christian legal group Liberty Counsel. “In fact, every argument for same-sex marriage is an argument for them as well.” A friend-of-the-court brief signed by 18 state attorneys general also briefly warns about the potential legalization of polygamy if gay marriage is legalized. The brief, which supports Prop 8, says the traditional definition of marriage is tied to the fact that only a man and woman can reproduce, thus continuing society’s very existence. The state has an interest, the brief says, to see that children are raised, ideally, by the mother and father who beget them. A mother and father in each home is “optimal for children and society at large. Once the natural limits that inhere in the relationship between a man and a woman can no longer sustain the definition of marriage, the conclusion that follows is that any grouping of adults would have an equal claim to marriage,” the attorneys general brief states, arguing that marriage no longer would be about the needs of children but about the desires of adults. A friend-of-the-court brief supporting Prop 8 by three academians, including Harvard’s Robert P. George, says there is a movement in the United States to see group relations recognized by the government. “Nor are such relationships unheard of: Newsweek reports that there are more than five hundred thousand in the United States alone,” the brief signed by George reads. Liberty Counsel’s brief quotes 19th century Supreme Court cases that upheld the federal government’s ban on polygamy in Utah. Among them were Reynolds v. United States (1878) and Murphy v. Ramsey (1885). In the 1885 case, the justices affirmed the traditional definition of marriage, writing that laws are “wholesome and necessary” when they are established on the basis of the idea of the family as “consisting in and springing from the union for life of one man and one woman in the holy estate of matrimony.” The court called traditional marriage “the sure foundation of all that is stable and noble in our civilization.” Liberty Counsel asserted that “when the traditional definition of marriage as that between one man and one woman is reversed to include other marriages, the state is left with little, if any, justification for other laws restricting marriage.”