March for Life Participants Getting Younger Each Year

World News Jan. 27: Tens of thousands of pro-lifers joined together Jan. 23 for the annual March for Life that followed a weekend of pro-life events in the Washington area. Read more about this and other world news. 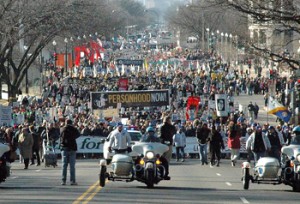 Tens of thousands of pro-lifers joined together Jan. 23 for the annual March for Life that followed a weekend of pro-life events in the Washington area, reports Baptist Press. The march drew its usually immense crowd in spite of intermittent rain. Young people, especially teenagers, dominated the march. “Every year the crowd gets younger,” said Barrett Duke, vice president of public policy for the Southern Baptist Ethics & Religious Liberty Commission. Duke joined in the march, which stretched along the National Mall to the Supreme Court. “There was probably only one gray head for every 40 or 50, maybe more, this year,” said Duke, whose first March for Life came in 2004. “I’ve watched that change every year I’ve been in the marches, and this year was utterly astonishing to me. Not only are the young people there—elementary grade kids, high school kids, college kids—but they’re there with a vibrancy, just an excitement about them being part of a movement that is about saving innocent human life.” He said, “I saw what almost certainly could be described as an emerging pro-life culture among young people in this country.” Duke said he has “no doubt that we are going to see Roe versus Wade overturned in this country.” Young people “will change the culture in this country, and they will be part of a movement that will rein in abortion on demand,” he said. Rep. Chris Smith, R.-N.J., one of Congress’ leading pro-life advocates, said preventing Obama from winning re-election in November is vital. “The past three years of abortion extremism by President Obama is a mere foretaste—a mere foreshadowing—of what will be if he is re-elected,” Smith told marchers, according to prepared remarks. “Given four more years, Mr. Obama will further pack the courts—including and especially the U.S. Supreme Court—with litmus-tested pro-abortion judges perched to retain the infamous holdings of Roe.”