Moses took radical action against sin. He understood that sin leads to destruction and death, and he didn’t mess around. 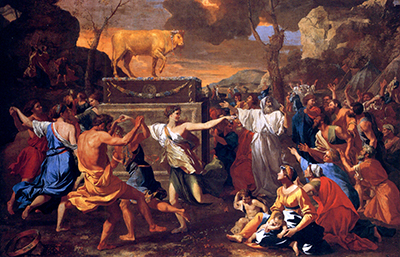 God delivered His people out of slavery in Egypt and brought them to Mt. Sinai, where He established a covenant with them. Moses was instructed to go up on the mountain and receive God’s law. He was there for 40 days, and while he was gone, the people constructed a golden calf which they proceeded to worship. Before Moses had even returned with the Ten Commandments, they had created a graven image and violated the second commandment.

Moses was angry. He smashed the stone tablets on which the Ten Commandments were written. And he also burned the golden calf and ground it into powder. He scattered the gold powder on the water and made the people drink it. The text does not tell us the rationale behind this action, but you don’t need an advanced degree to see what the outcome would be. The people would drink the gold and then they would deposit the gold in a latrine—where they would never be tempted to reclaim it!

So how are you doing in the fight against sin? If you struggle with pornography, have you installed web filters and handed the passwords off to someone else—or perhaps even gotten rid of the smartphone with its easy access? If you struggle with drunkenness, have you gotten the alcohol out of the house? If your issue is anger, have you apologized to those you have hurt and entered into an accountability relationship with someone? The struggle with sin is real. But are you truly struggling against it or are you fiddling around? Are you taking drastic measures or dancing around the edges?