The crowd who welcomed Jesus into Jerusalem may have been fans of Jesus, but they certainly weren’t followers of Jesus. 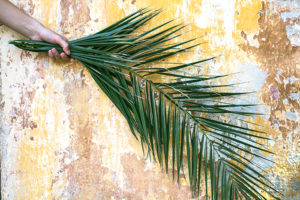 It was the Triumphal Entry and Jesus rode into Jerusalem on a donkey. His disciples began to grasp the prophetic significance of this event. On His way into the city crowds assembled around Him laid their clothes in the way and welcomed Him with palm branches and loud shouts. They cried out, “Hosanna to the Son of David! Blessed is He who comes in the name of the LORD! Hosanna in the highest!” (Matt. 21:9). You might say this group of people were fans of Jesus. Jesus had many who were caught up in the excitement of the miraculous healings, the feeding of the 5,000, and His wonderful teaching. However, the crowd who welcomed Him into the city on Sunday turned against Him on Friday. Their hosannas turned to crucify Him. They may have been fans of Jesus, but they certainly weren’t followers of Jesus.

When Jesus came into the city He cleansed the temple of those who twisted the true worship of God. He began to teach hard-edged truths and peeled back entrenched religious hypocrisy. The crowd of fans began to dissipate and turned against Him. In 5 short days He was crucified. Fans are good at cheering their hero. Fans get caught up in a wave of emotion. Fans have a limited understanding. And fans can change loyalties in a heartbeat.

Followers are different. The true followers of Jesus have a personal relationship with Him, not just a crowd excitement. Followers stick with Jesus even when they don’t quite understand it all. And followers of Jesus adhere to all of His teachings, not just the parts that are positive and exciting. When a large group left Jesus when He taught some hard truths, He asked His disciples, “Will you also go away?” Peter echoed the heartbeat of every Christ follower when he said, “Lord to whom shall we go: You have the words of eternal life” (John 6:68).

As we think of those two groups of people at His triumphal entry, which group are we in? Do we only come to the Lord when we need something? Do we only show up to church when something special is happening? Are we just a fan of Jesus or are we one of His true followers?