World News March 8: The U.S. Department of Homeland Security’s unmanned Predator B drone fleet has been custom designed to identify civilians carrying guns and track cell phone signals. Read more about this and other news. 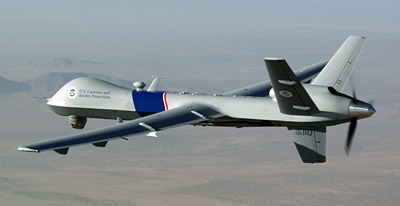 Recently uncovered government documents reveal that the U.S. Department of Homeland Security’s unmanned Predator B drone fleet has been custom designed to identify civilians carrying guns and track cell phone signals, reports breitbart.com. “I am very concerned that this technology will be used against law-abiding American firearms owners,” said Alan Gottlieb, founder and executive vice president of the Second Amendment Foundation. “This could violate Fourth Amendment rights as well as Second Amendment rights.” The Electronic Privacy Information Center obtained a partially redacted copy of Homeland Security’s drone requirements through a Freedom of Information Act request; CNET uncovered an unredacted copy. Homeland Security design requirements specify that its Predator B drones “shall be capable of identifying a standing human being at night as likely armed or not” and must be equipped with “interception” systems capable of reading cell phone signals. The first known domestic use of a drone to arrest a U.S. citizen occurred last year in the small town of Lakota, N.D., when rancher Rodney Brossart was arrested for refusing to return six of his neighbor’s cows that had wandered on to his property. Critics say the fact that domestic drones are being used in such minor matters raises serious concerns about civil liberties and government overreach. “That drone is not just picking up information on what’s happening at that specific scene, it’s picking up everything else that’s going on,” says drone expert and Brookings Institution senior fellow Peter Singer. “Basically it’s recording footage from a lot of different people that it didn’t have their approval to record footage.” Others, like progressive author Naomi Wolf, have warned that domestic drones may soon be weaponized. The military version of the Predator B drone carries 100-pound Hellfire missiles, but the Homeland Security’s Customs and Border Protection says the 10 drones in its domestic fleet are unarmed. Last month, NBC News uncovered a confidential 16-page Justice Department memo that concluded the U.S. government may execute a drone strike on an American citizen it believes to be a “senior operational leader” of al-Qaeda or “an associated force.” The Obama Administration defended the use of drones to kill Americans thought to be working with terrorists. “These strikes are legal, they are ethical, and they are wise,” said White House press secretary Jay Carney.