Chuck Colson with the Lord

World News April 24: Chuck Colson, who became a Christian amid the Watergate scandal and later an advocate for the spiritual transformation of prisoners, died Saturday. Read more about this and other world news. 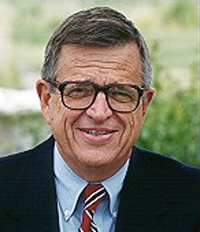 Chuck Colson, who became a born-again Christian amid the Watergate scandal and later became the most prominent advocate for the spiritual transformation of prisoners, died Saturday afternoon, according to Prison Fellowship ministry and reported in The Christian Post. He was 80. Colson had suffered from intracerebral hemorrhage, which resulted in him undergoing surgery about two weeks ago to remove the blood clot on his brain. Initially his condition improved and he was able to talk to his wife and children. But late last Tuesday, his condition took a turn for the worse and doctors had advised the Colson family to gather by his bedside in preparation for his departure. While Colson was facing arrest for his involvement in the Watergate scandal in 1973, a friend gave him a copy of C. S. Lewis’s Mere Christianity, which led to his dramatic conversion. He published his memoir Born Again in 1975, two years after becoming a Christian. The memoir was made into a film in 1978 carrying the same title. After his conversion, Colson dedicated his life to helping prisoners experience the radical transformation possible in Christ through his non-profit Prison Fellowship. For more than 30 years, Colson kept the tradition of ministering to prisoners in jail every Easter Sunday. “Whatever good I may have done is because God saw fit to reach into the depths of Watergate and convert a broken sinner,” said Colson in a statement in 2008 in response to receiving the Presidential Citizens Medal. “Everything that has been accomplished these past 35 years has been by God’s grace and sovereign design.” President George W. Bush in 2008 awarded Colson the Presidential Citizens Medal, the second highest honor to a private citizen, for his Christian-based outreach to prisoners, ex-convicts, crime victims, and their families. The award was created by President Richard Nixon to recognize citizens “who have performed exemplary deeds of service for their country or their fellow citizens.” “Through his [Colson’s] strong faith and leadership, he has helped courageous men and women from around the world make successful transitions back into society,” the White House had stated in the recipient citations. “The United States honors Chuck Colson for his good heart and his compassionate efforts to renew a spirit of purpose in the lives of countless individuals.”