Bombings in Brussels, Multiculturalism, and Jesus

This morning, terrorists struck the heart of Belgium. Why the cycle of hate and aggression? There are no simple, one-size-fits-all answers. But that doesn’t mean there aren’t any answers at all. 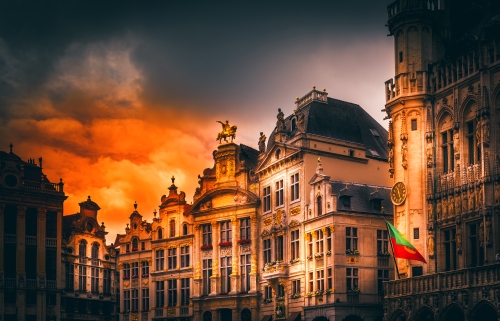 This morning, terrorists struck the heart of Belgium. In a coordinated attack, suicide bombers detonated their explosive devices in Brussels’s Zaventem Airport. Shortly thereafter, a third bomb was set off on a train stopped at Maelbeek subway station. Within hours, ISIS had officially claimed credit for the attacks. The death toll currently stands at 33, with approximately 250 injured.

The world is mourning, and we join them. Our deepest sympathies and heartfelt prayers are with the people of Brussels and the families of the victims.

As the world reacts to this latest display of extremist brutality, a wave of emotion sweeps across the West. The initial shock melts into furious outrage at the perpetrators, heartfelt sympathy for the Belgian people, and a sort of perplexed weariness brought on by the seemingly perpetual cycle of senseless death and destruction. Why does this keep happening? many are wondering. One Twitterer expressed the impulse this way: “So confused. I don’t understand how people can be so cruel to hurt others.”

Whence the terrorism? Why the cycle of hate and aggression? Obviously the situation is so variegated and complex that there are no simple, one-size-fits-all answers. But that doesn’t mean there aren’t any answers at all. Perhaps the Western world would be in a better position to understand the phenomenon of Islamic terrorism if we actually took the time to read Islam’s authoritative texts. If we did, we would be wise to spend some time reading the Qur’an’s ninth sura. There we would find Allah instructing his people as follows:

But when the forbidden months are past, then fight and slay the pagans [non-Muslims] wherever ye find them, and seize them, beleaguer them, and lie in wait for them in every stratagem (of war); but if they repent, and establish regular [Islamic] prayers and practice regular charity [i.e., Zakat, the third pillar of Islam], then open the way for them: for God [Allah] is Oft-Forgiving, Most Merciful. (Sura 9:5)

Or think ye that ye shall be abandoned, as though God [Allah] did not know those among you who strive with might and main [i.e., those who wage jihad], and take none for friends and protectors except God [Allah], His Apostle [Muhammad], and the (community of) Believers? (Sura 9:16)

Fight those who believe not in God [Allah] nor the Last Day, nor hold that forbidden by God [Allah] and His Apostle [Muhammad], nor acknowledge the religion of truth [Islam], (even if they are) of the People of the Book [Jews and Christians], until they pay the Jizya [a tax enacted on all non-Muslims] with willing submission, and feel themselves subdued. (Sura 9:29)

In this sura, Muslims are commanded to fight and slay unbelievers (i.e., non-Muslims), to befriend only fellow Muslims, and not to relent in their subjugation of other faiths until their adherents are totally subdued. This sura is especially informative since it was the second-to-last sura written. According to the Islamic doctrine of abrogation, the suras composed later in Muhammad’s life are understood to supersede those composed earlier. So the more moderate, peaceful-sounding language of the Meccan suras is overwritten by the militance of the Medinan suras (like this one).

Of course, many other precedents for violent jihad could be listed, from both Islam’s history and its holy writings. For the time being, I will leave that task to others. The point is simply this: notwithstanding the constant protestations from the popular media, violent terrorist jihadism is not a distortion of normative Islam; it is rather a natural extrapolation from received Islamic teachings. We are dealing with an ideology that explicitly commands its followers to slay and subjugate dissenters. Why should we be shocked and confused when some of them do so?

Unfortunately, we are not allowed to talk about this. For several decades, the shapers of public thought and opinion in democratic Western societies have been peddling an extreme, self-destructive form of multiculturalism in which one cannot utter a contrary word against any tenet of Islamic doctrine without being labeled a racist (even though Islam is not a race) or an Islamophobe (even though it is actually healthy to fear those who wish you harm). Instead of initiating a respectful yet honest discussion on the pros and cons of this particular religion, the intelligentsia instead expends enormous amounts of energy assuring us that violent terrorist jihadists are only fringe elements within the overwhelmingly moderate and peaceful Islamic community. I hate to be a contrarian, but this just isn’t true. Granted, the majority of Muslims in the world are not actively waging a campaign of violent jihad—but that doesn’t in and of itself make one a moderate. A huge swath of the Islamic world is in fact sympathetic to violent jihadism. We ignore this to our own peril.

Popular media outlets love to emphasize moderate Islamic reformist movements, such as those epitomized by thinkers like Dr. Zuhdi Jasser and moderate rulers like King Mohammed VI of Morocco. I do not deny that this impulse exists. Indeed, there is a growing chorus of peaceful, moderate-minded Muslims who are working to steer their religion away from the militancy and dominionism of traditional Islamic thought. From my perspective, this is an eminently healthy development within the Islamic world; may the reformist tribe increase. But the brute fact of the matter is that these movements still have a long way to go. Inasmuch as it would be admittedly disingenuous to deny the existence of moderate Islamic reformists, it would also be naive to overestimate their influence. Political correctness has, I think, compelled most of us to commit the latter error.

Something else also troubles me. Not only have our politically correct cultural norms disallowed us from having a frank, honest conversation about Islamic jihadism; I’m afraid that even if such a conversation were allowed, we wouldn’t be capable of having it. The Western world has sunk deep into an intellectual malaise. We have come to value style over substance, sound bites over discourse, and feelings over facts. Does the reality TV generation even possess the intellectual equipment, attention span, and critical thinking abilities to objectively evaluate competing ideologies? I have serious doubts.

Today we weep with you, Brussels. We mourn your dead. We pray for your families, your leaders, and your soldiers. We stand in solidarity with you against the depraved brutality of radical Islamic terrorism. But as we do so, might I suggest that the urgency of the hour calls for us to take a long view of the situation? It is high time that the West begins to evaluate the self-destructive impulse toward extreme multiculturalism, the reckless political correctness that enshrines tolerance as the highest and noblest good (always at the expense of even greater goods like liberty and virtue), and the culture of intellectual laziness and instant gratification that we have fostered. These things are not ultimately to be blamed for attacks perpetrated by violent jihadists, but they certainly do hamstring our ability to understand the aggressors aright and to prevent or withstand similar attacks in the future.

The Cross and the Suicide Vest

The contrast could not be starker. As jihadists were targeting civilians and coordinating their attacks to inflict maximum damage, Christians the world over were preparing to celebrate Holy Week, the commemoration of Christ’s passion, crucifixion, and resurrection. In one ideology, the faithful are commanded to strap suicide vests on themselves and detonate them in a crowd of noncombatants. In the other, an innocent Man strapped a cross to Himself and willingly died for the sake of the hostile crowd who tortured Him. In one book we find the command to “fight and slay the pagans wherever ye find them.” In the other we read, “Love your enemies, bless those who curse you, do good to those who hate you, and pray for those who spitefully use you and persecute you.”

Jesus is the embodiment of the latter philosophy. He voluntarily embraced abject shame and humiliation (to say nothing of grotesque physical abuse and an excruciatingly painful death) all for the sake of the rebels who rejected Him. In His sacrificial death, He expressed His unconditional love for all mankind. And in His resurrection, He demonstrated God’s awesome power to bring beauty out of chaos and meaning out of pain. Tragedies like the one we witnessed today remind us that our world is fundamentally broken and that we do not possess the strength, foresight, or fortitude to solve the vast, seemingly insuperable problems facing us. Ultimately, the answer to all life’s woes cannot and will not be found in programs, politicians, strategies, armies, or think tanks. It can only be found in a Person: Jesus Christ, the crucified and risen Lord of Glory, Whose matchless love and inexhaustible grace will outlast every evil human scheme and all the sorrows and disappointments this world has to offer. When every civilization has crumbled and time begets eternity, He will make all things new.