Baptist Church Goes All Out on 4th

World News July 6: The Baptist church in Georgia that produced Fireproof and Courageous received thousands of people for its annual Independence Day celebration. Read more about this and other news. 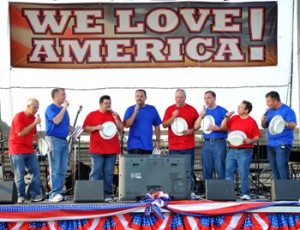 The Baptist church in Georgia that produced evangelical-themed films like Fireproof and Courageous received thousands of people for its annual Independence Day celebration. Sherwood Baptist Church of Albany, Ga., held its eighth annual “Freedom Fest” on Sunday, July 1 at its Sports Park and had an estimated 5,000 attendees. “This Southwest Georgia community event takes place during the week of July 4th and is an American celebration of patriotism, freedom, and our national heritage,” reads an info sheet on the event. “We desire to celebrate the founding of our great country in a fun environment that is safe for the whole family. . . . We also desire to honor our military on this day.” Kenneth Bevel, the coordinator for Freedom Fest, told The Christian Post that over 600 volunteers helped out for the free-to-the-public event. The outdoor summer event featured many classic diversions, such as inflatable games for kids, horse rides, rock climbing, live music, a Wild West show, food, and fishing, and culminated with a fireworks show in the evening. The church also had an evangelical outreach present as well. Held at a park owned by Sherwood Baptist, the “Freedom Fest” has been known to draw large numbers of attendees every year. In 2010, an estimated 25,000 people went out to the festival. Bevel told CP that they “expected 10,000” this year, but they got about half that number “because of the extreme heat.”