A Disturbing Trend in the Abortion Debate

Some pro-choice advocates agree that life begins at conception, but remain pro-choice.

Two years ago, I wrote an article on the ethicality of abortion. In framing the discussion, I stated at the outset:

The ongoing debate over the ethical viability of abortion has tended to center on the issue of when precisely life may be said to begin. The reason for this is not difficult to grasp: if it is granted that life begins at conception, then it logically follows that the fetus within the womb merits all the legal rights and protections due to living human beings, including the legal protection against murder. If on the other hand life does not begin until birth, then the fetus cannot be expected to receive those rights and protections, and abortion is therefore an ethically viable (though not necessarily ethically praiseworthy) option.

Until recently, this has usually been true. Pro-life advocates have typically insisted that human life (or human personhood) begins at conception, while their pro-choice opponents have preferred the view that it does not begin until birth (or viability at the very earliest). Pro-choice advocates have often argued that since a fetus is either subhuman or only potentially human, aborting it is not tantamount to murder. After all, no one would have moral qualms over the surgical removal of a tumor or an extra appendage! 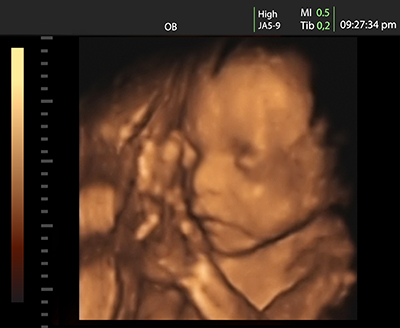 But this pro-choice argument has fallen on hard times with the relentless progress of technological development. Three- and four-dimensional intrauterine imaging, pioneered in the late 1980s, has made it possible to generate extremely detailed representations of the developing fetus as early as the 12th week of gestation. Once one has seen such a detailed representation, it becomes very difficult to deny the humanity of the unborn child. Other developments in modern fetology have equipped the pro-life position with sophisticated, scientifically precise arguments based on empirical data (e.g., Norm Geisler, Christian Ethics, 2nd ed., 149–152). Unsurprisingly, many pro-life advocates have heralded these developments as game changers. As technology becomes more advanced, fewer people will be able to stomach the notion that fetuses are nonpersons. And surely that will alter public opinion on this matter irreversibly; after all, no thinking human would ever concede the personhood of the fetus and yet remain pro-abortion in orientation, right?

Wrong. The disturbing trend to which I refer is just that: conceptualizing the fetus as a human life and conjointly favoring abortion as an ethically permissible (or even ethically praiseworthy) practice. That anyone could possibly hold these two positions simultaneously will strike many pro-life advocates as unconscionable, but I fear that is the direction in which our culture is likely to head.

Three recent news items are indicative of this trend. First Wendy Davis, the latest Democratic gubernatorial candidate for Texas and a leading spokesperson for the pro-choice position, publicly revealed the details of two abortions she had received earlier in life. In an interview with Robin Roberts, Davis focused on the second abortion. “Our baby had a severe brain abnormality,” she said. “We knew that the most loving thing that we could do for our daughter was to say goodbye. And like so many other families across this country we made that difficult decision with as much love for our daughter as can be imagined.” With a wistful expression crossing her face, Davis continued: “Her name was Tate Elise Davis. And we loved her as we love our living daughters, Drew and Amber. And she forms, of course, a very important part of my life.”

My point here is not to pass judgment on Wendy Davis. She will answer to God, the creator and sustainer of life, not to me. The point, rather, is to call attention to the language with which she frames the decision. She did not regard the fetus in this case as a cluster of nonsentient, nonhuman cells, but rather as a daughter. A daughter with a name and a human identity. For Davis, this was a matter of euthanizing a living human person, not having a mass of extraneous tissue surgically removed. The distinction is important. It cuts to the very heart of the abortion debate.

Note, too, that these comments do not come from an unknown extremist on the fringe of the pro-choice movement. Wendy Davis is arguably the movement’s most recognizable representative today.

Second, a young Scottish woman named Leyla Josephine wrote and recorded a poem (warning: some profane language) reflecting on the abortion that she had received as a teenager. Titled “I Think She Was a She,” the poem boldly asserts Josephine’s refusal to be ashamed because of her choice. The video was uploaded to the Internet, after which it quickly went viral and drew the attention of multiple news outlets.

In part, the lyrics read:

Note the usage of feminine personal pronouns (she and her) to refer to the unborn child. That’s rather a strange way to discuss a nonhuman, nonliving, nonpersonal wad of organic matter. Ordinarily English-speakers reserve these pronouns to designate the living. Even more unnerving is the author’s personalizing of the aborted life in question. She reflects not on a mundane medical procedure, but on the unrealized life of a child whom she could have loved and nurtured as a mother. “She could have been born,” Josephine intones. But she wasn’t.

In this case, the rationale for seeking the abortion apparently had nothing to do with the fetus’s genetic health. Instead, the timing of the pregnancy was simply inconvenient:

But I would have supported her right to choose.
To choose a life for herself, a path for herself.
I would have died for that right, just like she died for mine.
I’m sorry but you came at the wrong time.

Now, of course, the child will never have the right to choose anything. Ever. Josephine seems oblivious to the fact that giving one’s life for a cause is entirely different from taking someone else’s life for it. But more germane to the subject at hand, how can a fetus be said to die (“just like she died for mine”) unless it is admitted first to be alive? And isn’t such an admission tantamount to conceding that abortion is nothing less than willfully taking a human life? On what grounds, then, can it rationally be distinguished from good old-fashioned homicide?

Third and finally, I was saddened to read a woman’s open letter to “the little life I won’t get to meet.” It was posted to Reddit and, like Leyla Josephine’s poem, quickly spread throughout the media. The letter reads as follows:

I can feel you in there. I’ve got twice the appetite and half the energy. It breaks my heart that I don’t feel the enchantment that I’m supposed to feel. I am both sorry and not sorry.

I am sorry that this is goodbye. I’m sad that I’ll never get to meet you. You could have your father’s eyes and my nose and we could make our own traditions, be a family. But, Little Thing, we will meet again. I promise that the next time I see that little blue plus, the next time you are in the same reality as me, I will be ready for you.

I can’t do to you what was done to me: Plant a seed made of love and spontaneity into a garden, and hope that it will grow on only dreams. Love and spontaneity are beautiful, but they have little merit. And while I have plenty of dreams to go around, dreams are not an effective enough tool for you to build a better tomorrow. I can’t bring you here. Not like this.

I love you, Little Thing, and I wish the circumstances were different. I promise I will see you again, and next time, you can call me Mom.

Without wanting to become repetitive, I draw your attention to the personal language used to describe the fetus. This time the gender is not specified, so personal pronouns are sparser. Still, one gets the distinct impression that the woman is addressing what she considers to be a living human entity, not an amorphous blob of nothing in particular. Indeed, the title itself admits that the baby is a “little life”! Precisely what the pro-life movement has been arguing for years.

In fairness, it must be admitted that three cases do not constitute a sufficiently large sample to declare this a trend. At least not in a scientifically precise sense. Nevertheless, the fact that each of these incidents garnered such widespread news media attention and social media response, coupled with the fact that Wendy Davis is a highly recognized spokesperson for the mainstream pro-choice movement, suggests that they are not isolated, stochastic events. Quite plausibly, they may be the first faltering steps toward the development of a more consistent and intellectually honest, yet far more chilling and cold-blooded pro-choice movement.

Especially illuminating is the worldview that apparently underlies these expressions of abortion-approval. Wendy Davis can perhaps claim extenuating circumstances for her abortion (the presence of genetic abnormalities), but as far as we know, the other two cases lack such a factor entirely. In the second case, the baby simply “came at the wrong time,” while in the third the mother didn’t “feel the enchantment” that she was “supposed to feel.” And this is taken as moral justification for terminating human life? Evidently so. Witness the elevation of autonomous freedom over every other ethical impulse. Selfishness is being sacralized. The individual’s “right to choose” is being given precedence over all other rights, duties, and considerations—even over our country’s first venerated “unalienable right,” the right to life. Those who decry our culture as a culture of death are absolutely right in that assessment, but their criticism needs to go deeper and pinpoint the more basic impetus whence this championing of death springs. More fundamentally, ours is a culture of selfishness. Perhaps that is where our pro-life polemic should begin.

As the pro-choice movement starts to shed its thin veneer of moral defensibleness, may we redouble our efforts in the long struggle to protect America’s unborn children, the most innocent and vulnerable among us.

Next post A Disturbing Trend in the Abortion Debate