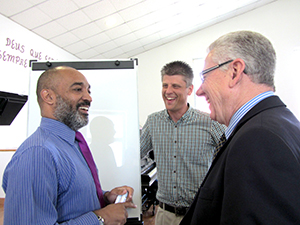 The Baptist Bulletin is now available in a digital format. It includes all the same great material as the print version, plus extra articles and photographs in a section called Bb Plus. The Baptist Bulletin, Digital Edition is included with your print subscription (digital-only subscriptions also available). Everyone can check out the September/October issue for free!

Chris Hindal, director of GARBC International Ministries, and his wife, Deb, traveled to the coasts of several countries on their three-week survey of Western Europe. They were on a mission to identify potential partners for the International Partnership of Fundamental Baptists Ministries and to check on Regular Baptist Press users who receive curriculum through Gospel Literature Services.

Chris and Deb arrived in Dublin, on Ireland’s east coast, on April 26. Traveling southwest, they began their survey at the Clonmel Christian Bible Church on April 28. This small group of believers meets at the Park Hotel while they wait on God’s provision for a building. Chris preached there and also presented the international partnership. He says Pastor Mike and Christine Carey took wonderful care of Deb and him, providing great food and fellowship. The church expressed their thankfulness for the Sunday School materials they receive through GLS. Ireland is a difficult place to minister because Roman Catholicism places so much pressure on people to remain in the church. “The need is great and the laborers are few,” says Chris.

That Wednesday, he spoke to a small group of pastors and lay leaders in the area surrounding Tralee, on the west coast. Chris says the group was greatly encouraged by the work of IPFBM partners worldwide, and indicated it is easy to fall into the “Elijah syndrome” of feeling alone. The work in Ireland is slow and requires lots of patience in building relationships and the right to be heard, says Chris.

Wednesday evening he spoke to the prayer group that meets in the home of Pastor Shawn and Tania Abrahams. Shawn sings in a community choral group, using this and “other community touches” to enlarge his influence for Christ. He and Tania formerly served as missionaries in South Africa, where they used materials provided by GLS. Shawn expressed his gratitude, saying, “I am not sure how we would have ministered without the help of GLS. We have used RBP materials with great profit in both countries.”

The Hindals’ next stop took them south and across the water to Lisbon, on Portugal’s coast. ABWE missionaries entered Portugal in 1980, focusing on Lisbon for church planting. Evangelism is met with much opposition in Portugal, and new believers face family pressure to stay within the Roman Catholic Church.

Missionary Brent Lowe coordinated the Hindals’ schedule and had Chris accompany him to a Saturday men’s retreat, where about 75 men gathered for instruction and encouragement. On Sunday Chris spoke in two ABWE-founded churches. Deb says she appreciates worshiping with nationals and participating in worship that reflects their culture.

Sunday afternoon she and Chris joined several missionaries at the birthday party of a one-year-old MK. They witnessed firsthand the enjoyment of serving with others on a team. Chris and Catrina Herrick, also serving with ABWE, hosted the Hindals for lunch. Such personal times not only provide encouragement for the missionaries, but also give Chris and Deb insights into the ministry in specific countries.

The Hindals also spent a wonderful evening with veteran missionaries Jon and Marilyn Rust. They saw the recently renovated facility of the Rusts’ new church plant. During the week, the facility serves as a Christian bookstore and a source of additional contacts in the community. Jon told Chris about the Lisbon-area association of churches, called the Fellowship of Baptist Churches for World Evangelism. Nine churches participate in the fellowship, with four of them pastored by nationals. “This fellowship holds the most potential as a partner in the IPFBM,” says Chris.

Chris and Deb then visited Manilva on the coast of Spain. Seven Baptist Mid-Missions missionary couples met with their BMM administrator, Vernon Rosenau, for a four-day retreat there. Missionary Mark Stipp led the meetings and arranged for Chris to present the IPFBM. Chris says: “As in other European countries, Roman Catholicism presents a huge challenge to the church-planting efforts in Spain. Praise God for those who are persevering in spite of the slowness of the work.”

One day the Hindals traveled to Málaga, also on the coast, where they visited a clandestine ministry. “Producing radio and television programming, this ministry broadcasts the gospel in culturally sensitive ways across the Straits of Gibraltar into the Muslim country of Morocco, North Africa,” says Chris. Those who contact the ministry receive Bible literature. “Hundreds of contacts are being cultivated in an otherwise closed country through Bible correspondence courses,” says Chris.

From Málaga, Chris and Deb took a personal day to visit Morocco. As they were warned would happen, someone followed them through the streets, but the tail was for their protection. “The Moroccan government wants to make sure that their tourists stay safe,” says Deb. “Chris had an unusual opportunity to share the gospel in Morocco with two lesbian partners who were part of our tour group. God arranges appointments even in unlikely places.”

Back in Spain, Chris and Deb traveled interior to Madrid. Roy and Nancy Jones, veteran ABWE missionaries who live near Madrid, graciously hosted them, and Roy arranged for them to have lunch with another veteran couple, BMM missionaries Marvin and Becky Robertson. Roy and Marvin are friends, both having served in the area for about 40 years. They have had parallel experiences, with each one’s ministry running less than 100 in attendance. They use RBP Sunday School materials translated into Spanish, provided through Editorial Bautista Independiente, a ministry of BMM.

Chris preached and presented the international ministries in two area churches: one pastored by ABWE missionary Glenn Clodgo in the Madrid suburb of Coslada and another ABWE church in the area. Chris says, “The Spaniard brothers and sisters were warm, and their worship was meaningful and lively.”

He says that Western Europe represents a region with a deficit of the gospel. “Faithful missionaries are punching holes in the darkness, but more recruits are needed.” GLS plays a vital role in assisting these ministries.

Jonita Barram is assistant editor of the Baptist Bulletin.