William Wooldridge Jahnke, a retired staff member of Clarks Summit University, died on June 3. He was 91. 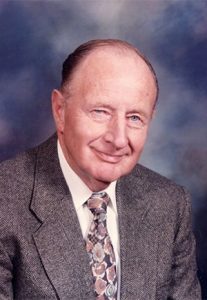 William trusted in Christ as his Savior at age 12. He served in the United States Army Air Forces for two and a half years during WWII and was trained as a B-17 tail-gunner. Upon his discharge, he graduated from Bentley School of Accounting and Finance (now Bentley University) in Boston. There, after having drifted spiritually, he renewed his fellowship with the Lord. He then held accounting positions in Colorado and New Hampshire.

Early in 1961, Dr. G. Arthur Woolsey, then president of Baptist Bible Seminary, asked him to consider the position of business manager at the school, then located in Johnson City, New York. Bill accepted the post that summer, taking the school out of its indebtedness at the time, thus beginning his 28-year-long association with the college, ending with the position of vice president of financial affairs. Bill helped keep the school, which today is called Clarks Summit University, “in the black” with its many financial challenges. He was also instrumental in helping the college find and relocate to its new campus in Clarks Summit, Pennsylvania, in 1967 and 1968. Many times, he would fall to his knees at his office desk, asking the Lord for wisdom in his overwhelming responsibilities.

Bill, along with his wife, June, was a resident of Maranatha Village, Sebring, Florida, for 25 years. He served as a Village board member for 10 years and served several terms as a deacon at Maranatha Baptist Church. Additionally, he served as a deacon and Sunday School teacher in all the churches in which he and June were members. He was particularly known for playing the piano by ear. He joined another member of Maranatha Baptist Church in ministering at a local nursing home: Bill would play a keyboard for the residents, going from room to room, and had the joy of leading several seniors to the Lord, one of them at age 101.

Bill is survived by his wife, June; their three children, Rachel Waite, Mark, and Paul; nine grandchildren; and six great-grandchildren.