Willard Read Benedict, a missionary and pastor, died Jan. 19. He was 87. 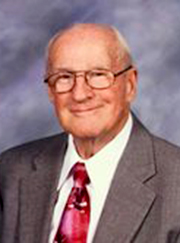 OCALA, Fla.—Willard Read Benedict, a missionary and pastor, died Jan. 19. He was 87.

He grew up in Ardsley, New York, and at 10 years old, accepted Christ as his personal Savior. While he was still 10 years old, his life was deeply impacted by the passing of his father. After graduation from high school, Willard briefly served in the Navy Reserve during the end of World War II. He attended Baptist Bible Seminary and dedicated his life to serving the Lord through missionary and pastoral service.

After beginning Brooklyn (New York) Baptist Church and after the passing of his first wife, he met Donna Ahlgrim, who was a missionary in East Pakistan. They fell in love and were married on Oct. 28, 1966, in Hobart, Indiana. They were missionaries in Bangladesh with the Association of Baptists for World Evangelism and then became church planters in the United States, planting three churches in Florida.

Willard was best described as a faithful servant of God, a passionate witness for the gospel, and a dedicated husband and father. He loved watching and playing baseball and football, cheering for the Brooklyn Dodgers, reading the Word of God, and eating brownies. His favorite verse was Isaiah 40:31. So many people loved that Willard could not tell a joke without bursting into laughter throughout it.

Willard was short in stature, but a giant for Christ.