Ralph G. Colas, a pastor, died Oct. 22 at age 85. Sensing God’s call to the ministry as a young man, he followed his father’s example, who was a pastor in Elimsport, Pennsylvania, for many years. 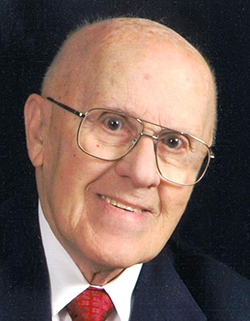 Sensing God’s call to the ministry as a young man, he followed his father’s example, who was a pastor in Elimsport, Pennsylvania, for many years. After graduating from Baptist Bible Seminary in Johnson City, New York, in 1955, over the next 37 years Ralph pastored churches in Kansas City, Kansas; Algona, Iowa; Waterloo, Iowa; Littleton, Colorado; Anchorage, Alaska; and Meadville, Pennsylvania. He earned a DDiv degree from Denver Baptist Bible Seminary in 1977.

Ralph was very involved with the American Council of Christian Churches for many years during his pastorates, and then served as the executive secretary of the ACCC from 1992 to 2014.

God granted Ralph a long life to be a blessing to his family, and to impact and influence many others over his numerous years of faithful ministry. He loved his family and was blessed with many dear friends from his previous pastorates and from those he served with at the ACCC.

Although suffering from various health issues over the last few years, he was a great example of accepting trials without complaining.

Ralph is survived by his wife of 60 years, Alice; their children, Kevin, Craig, and Lauren; eight grandchildren; and five great-grandchildren.