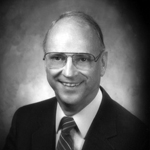 GRAND RAPIDS, Mich.—Paul Beals, longtime missionary and missions professor, went Home to be with his Lord and Savior on May 29, 2012. He was 88. Dr. Beals and his wife, Vivian, met at Wheaton College, where he graduated in 1945. He graduated from Moody Bible Institute in 1948 and Dallas Theological Seminary with a ThM in 1952 and a ThD in 1964. Together they served as missionaries in Central African Republic with Baptist Mid-Missions (1952–1964). From 1964 to his retirement in 1997, Dr. Beals was professor of missiology and intercultural studies at Grand Rapids Theological Seminary of Cornerstone University. Meanwhile, he served as consultant with Baptist Mid-Missions. In addition to ministry in North America, he served in several other countries, including Australia, England, Ghana, Guyana, Hong Kong, Japan, Jordan, Papau New Guinea, Philippines, Romania, and Thailand. Dr. Beals initiated the Continuing Education Program for missionaries at Grand Rapids Theological Seminary. The seminary’s Southeast Asia Extension Program grew out of this program. After his retirement, he became professor emeritus at the seminary and missionary emeritus with Baptist Mid-Missions. He served as president of the Evangelical Missiological Society and was the author of A People For His Name: A Church-Based Missions Strategy, published by Regular Baptist Press (now out of print). He felt that his greatest achievement was multiplying his ministry by teaching African pastors and North American missionaries and pastors in training. He was gratified that some “receiving” countries in the beginning are now “sending” countries. Dr. Beals is survived by his wife, Vivian; their children, Lois Piercy, Dr. Stephen and Martha Beals, Samuel and Rebecca Beals, and Timothy and Cheryl Beals; 12 grandchildren; and 16 great-grandchildren. Those planning an expression of sympathy are asked to consider Paul A. Beals Scholarship Fund at Grand Rapids Theological Seminary of Cornerstone University, 1001 E. Beltline Ave., NE, Grand Rapids, MI, 49525, or Northland Baptist Church Missions Fund at 4162 Hunsberger Ave., NE, Grand Rapids, MI, 49525.