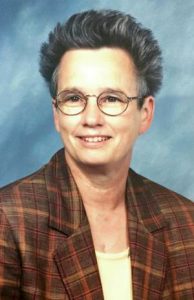 She earned a BA in psychology from Ouachita Baptist University and an MS in criminal justice from Xavier University. She worked as a social worker for the Department of Human Resources in Kentucky for seven years before becoming dean of women at Cedarville University in 1974. She retired from the university in 2010 as associate dean of students.

Pat had a passion for building into students’ lives. “Her own testimony focuses on God’s forgiveness and His healing grace that involves much more than restored physical health,” Cedarville University said of her in 1988. “She reaches out to those around her, encouraging and reminding each one that the Lord works with most of us after we are broken.”