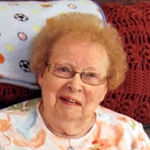 BURLINGTON, Wis.—Mary Alice Modrall, 87, longtime church secretary at Emmanuel Baptist, Toledo, Ohio, passed away on Dec. 6. She was born in Erie, Pa., on April 9, 1925, to Rev. Earl V. and Rosa Willetts. Her father was an early leader in the GARBC, having served as pastor of Calvary Baptist Church, Bellefontaine, Ohio, (1934–1947) and Berea Baptist Church, Berea, Ohio (1947–1973). Mary Alice graduated from Moody Bible Institute in 1945, part of a class that included George Sweeting, William Fusco, and several others who would later serve as GARBC pastors and missionaries. She moved from Chicago to Toledo in 1947, working as an office manager at Mass Mutual. After joining Emmanuel Baptist Church, she directed a women’s chorus, sang in the choir, and played piano for a gospel quartet. She later taught a Sunday School class and even drove the bus when needed.

In 1973 she joined the Emmanuel Baptist staff as the pastor’s secretary, serving for 19 years with three senior pastors. Retiring in 1993, she later moved to Wisconsin to be closer to her family. Survivors include her children, Larry Modrall and Kathy King, and four grandchildren.