Lewis Glenn Seaver, a pastor for 45 years, died March 26. He arrived in Heaven just in time to celebrate Resurrection Sunday with his Heavenly Father. 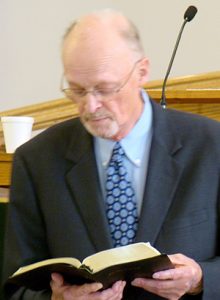 APALACHIN, N.Y.—Lewis Glenn Seaver, a pastor for 45 years, died March 26. He arrived in Heaven just in time to celebrate Resurrection Sunday with his Heavenly Father.

Seaver earned a bachelor’s degree in theology from Baptist Bible Seminary in 1965. There he met his sweetheart, Naomi Ruth Beikert, whom he married on June 5, 1964. Pastor Seaver believed that he had received a definite call to the ministry as a teenager and faithfully proclaimed the Word of God and shepherded Christ’s sheep full-time for 45 years.

His lifelong pastoral ministry began at First Baptist Church, Dimock, Pennsylvania, where he was ordained in 1966. He subsequently accepted a call to Calvary Baptist Church, Akron, New York. He shepherded there for five years and had a tremendous impact on numerous lives, including Ken Rudolph, among others, who has gone on to impact individuals all over the world for Christ.

In 1972, he accepted a call to First Baptist Church, Newfield, New Jersey, and in 1978, he sensed the Lord leading him to shepherd Bethel Baptist Church, Vestal, New York, where he devoted the next 28 years ministering to many generations of individuals and families.

In 2007, he accepted a call to pastor First Baptist Church, Schenevus, New York, which he did faithfully for three years until continued failing health forced him to retire from full-time pastoral ministry. He served through pulpit supply until he was no longer able. Even in long-term care, after many hospitalizations and surgeries, he continued to minister, frequently sharing his faith and the gospel with staff members until near the very end.

Pastor Seaver was an avid and voracious reader across varying subjects because he felt it enhanced his ministry. He especially loved reading the Word of God and books about history. Over his lifetime, he accumulated a personal library of over 4,000 Bibles, books, and journals. When his eyesight began to fail him in the last few weeks of life, he asked for audio books. Even until his last days here on earth, he kept up to date on world events and was especially interested in Israel and how the world situation plays out according to Scripture.

Fellow ministers and church members call Pastor Seaver a friend who exhibited graciousness, wisdom, and encouragement. He had a real love for the people in his churches and worked hard to minister to each person whose care he was entrusted with. He took seriously the fact that he would someday have to stand before God and give an accounting for each one in his flock.

He is survived by his wife of 51 years, Naomi; a son, Mark; and two daughters, Michelle Gregory and Julie Decker.