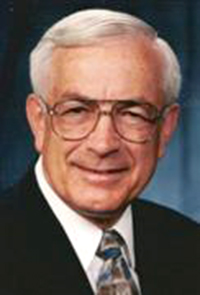 Toward the close of WWII, Leigh enlisted in the U.S. Navy at age 17 and served in Kodiak, Alaska, with a Naval Air Squadron. He was recalled to active duty in 1951 and was attached to an LTA (Lighter Than Air/blimp squadron) in North Carolina. During that time he heard the gospel and trusted Jesus Christ as his Lord and Savior.

“Leigh embodied all that the Scripture speaks of when it admonishes us to ‘make full proof of thy ministry,'” says Dr. Gary Anderson, president of Baptist Mid-Missions, where Leigh would later serve.

Born and raised in Fulton, New York, Leigh married Carol Fletcher of nearby Oswego in 1952. Following his graduate studies in Dallas, the couple served as missionaries in Québec, Canada, planting a church and establishing a French publishing ministry. In 1970 Leigh and Carol returned to the United States, where they established Campus Bible Fellowship groups, a ministry of Baptist Mid-Missions, on 23 campuses in the Northeast. In 1974 he joined the staff of BMM’s home office, serving as director of North American ministries and the Missionary Finance Department.

He retired in 1995 as first vice president. Following retirement, he spearheaded evangelistic outreaches to the 1996 Summer Olympic Games in Atlanta and the Salt Lake City Winter Olympics in 2002. He also served on BMM’s council until 2009 and was president of Fellowship of Missions from 1997 to 2004.

Baptist Mid-Missions honored Leigh in 2010 with its William C. Haas Lifetime Service Award. “Leigh Adams refused to believe that enough could ever be done to reach souls for Christ,” Dr. Anderson said at that time. “Leigh is likely the only person to have served with Baptist Mid-Missions as a missionary, Home Office staff member, and member of the General Council.” During the half century that Leigh served with BMM, Anderson continued, he sought to “unleash the best of his physical and mental energy toward building Christ’s church.”

He is survived by his wife, Carol; five children, John, Jeffrey, Thomas, and Roger, and Julie; 13 grandchildren; and four great-grandchildren.
Posted in With the Lord on October 6, 2015.