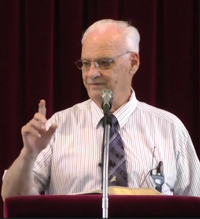 Kenneth graduated from Hyattesville (Maryland) High School in 1951. That same year he joined the United States Air Force and was later stationed in Presque Isle, Maine, where he met the love of his life. He and Ramona married in 1954. He was discharged from the service in July 1955 and then served the Lord as a pastor for 59 years at Bible Baptist Church in Wiscasset, Maine, as well as churches in Connecticut, Vermont, and New Jersey.

Kenneth is survived by Ramona and their children, Randy, Eugene, Stephen, Naomi, and Karen; 11 grandchildren; and 21 great-grandchildren. He was preceded in death by a grandson.