Irwin “Wyn” Olson, a pastor and leader of the Indiana Fellowship of Regular Baptist Churches, died May 26 after a series of strokes. He was 96. 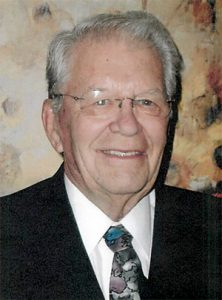 MESA, Ariz.—Irwin “Wyn” Olson, a pastor and leader of the Indiana Fellowship of Regular Baptist Churches, died May 26 after a series of strokes. He was 96.

Olson was born in Hillsboro, North Dakota, to Pedor and Hannah Olson of Scandinavian heritage. When he was 5 years old, his family moved to a farm near Bagley, Minnesota. He graduated from high school in Fosston, Minnesota, then went on to Northwestern Bible College in Minneapolis to earn his ThB degree. Following graduation, he married his college sweetheart, Arleen “Ginger” Nelson. He continued his education at Hardin Simmons University in Abilene, Texas.

Olson pastored Baptist churches in Garden City, Minnesota; Park Rapids, Minnesota; and Mentone, Indiana. While in Garden City, he and Ginger organized county Youth for Christ rallies, reaching a high attendance of almost 800. While in Park Rapids in 1953, he began a radio broadcast, which became an effective outreach ministry. In 1963, while serving on the Council of Twelve for the Indiana Fellowship of Regular Baptist Churches (now called Crossroads Fellowship), he was asked to be the IFRBC state representative. He opened the office headquarters near Indianapolis, where he served for 23 years.

As state representative, he traveled the state to visit churches and present the IFRBC ministry, oversaw the fellowhip’s camping program, organized men’s retreats, published the Hoosier Baptist Bulletin, counseled pastors and church leaders, and helped start new churches. In addition, he served on the Baptist Children’s Home board and served as a trustee at Cedarville University on the education committee.

After he retired in 1984, the IFRBC honored Olson as Pastor of the Year. He and Ginger then moved to Silveridge RV Resort in Mesa, Arizona. Soon after arriving, he was asked to be the pastor of the resort’s chapel. Two years later, he bought a condo in Mesa’s Sunland Village East, where he also was asked to start a chapel service. He continued pastoring at Silveridge for 10 years simultaneously with The Village Chapel, where he served for 22 years.

In addition to his role as pastor at Sunland Village East, he served the SVE community in many capacities: he did landscaping, worked as security patrol, was involved with many of SVE’s organizations and committees, served as president of the SVE Condo I and II Board and later as president of the homeowners association, and was committee chairman for the development of a fitness center.

He retired again at age 90, having ministered for 62 years. For six years of his time in ministry, he was devoted to taking care of Ginger, who was bedfast. About two years after Ginger’s death, he married her sister, Joan Salseth.

His family remembers him as a loving, kind, compassionate, hardworking father who loved serving the Lord.

A memorial service will be held July 29 at 2:30 p.m. in the Sunland Village East auditorium.