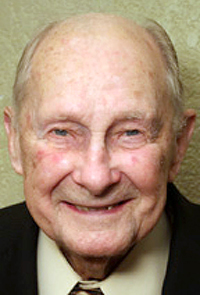 Harley grew up in Sutter, Ill., and was saved at age 16 under his father’s preaching. He attended Moody Bible Institute in Chicago and Northwestern Bible College in Minneapolis. He was a Baptist pastor, serving congregations in Oskaloosa, Iowa; Lincoln, Mont.; Spokane and Bridgeport, Wash.; and Traer, Iowa.

He also worked as a mechanic for Friedley Olds-Lincoln-Mercury in Waterloo, Iowa, and Coonradt Ford in Waverly, Iowa; operated his own shop; and had worked for Puralator Courier Service in Waterloo.

After retiring from the ministry, Harley and his wife, Doris, moved to Shell Rock, Iowa. Harley enjoyed woodworking, photography, and working on cars and tractors. He was a member of Hagerman Baptist Church in Waterloo.

He was preceded in death by his wife, Doris, whom he married Aug. 27, 1950; three sisters, Mildred Luder, Helen Swain, and Imogene Cooper; and two brothers, Murray and Harry.