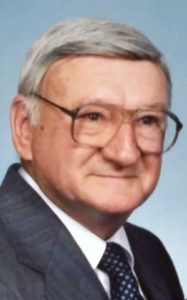 Frank was the founding pastor of Midview Baptist Church, North Eaton, Ohio, and served as pastor there from 1955 to 1965. While living in North Eaton, he also taught sixth grade for three years at Eaton Elementary School.

After serving in North Eaton, he started a Baptist church in Vienna, Ohio, and served as its pastor from 1965 to 1973 and from 1981 to 1992. He also pastored Bible Baptist Church, Newark, Ohio, from 1973 to 1981 and led that congregation through an extensive building program. He then returned to Midview Baptist Church, where he served as associate pastor from 1996 to 2004.

In addition to his pastoral ministry, he was involved in Camp Patmos, Kelley’s Island, Ohio, and spoke many times for the camp’s weekly chapel. He was also a member of Baptist Missionary Builders’ executive committee.

Before ministering as a pastor, Frank served with the US Army from 1944 to 1946 in the 32nd Division Infantry in the Philippines. He reached the rank of staff sergeant and received a Purple Heart.

Frank enjoyed traveling, and in 1993 he and his wife traveled to Ukraine with Campus Crusade to educate children in public schools about Christian morals, and in 1975 he hosted a tour of the Holy Land and Egypt.

Frank is survived by his wife, Marjorie; two sons, Ronald and Richard; and three grandchildren.