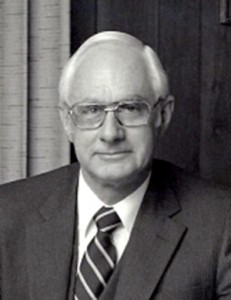 In 1942, during World War II, Frank was inducted into the armed services, with the majority of his service in the Panama Canal Zone under the US 4th Army Headquarters Battery 906 Anti Aircraft Artillery.

Following his discharge from the armed services and with the encouragement of his Army chaplain, Frank felt called to the gospel ministry and received his training at Northwestern Bible College in Minneapolis. While in college, he met Betty L. King, and they were married June 12, 1948. Betty passed away Jan. 20, 2000.

He was also a past member of the Wisconsin Association of Regular Baptist Churches’ Council of Eight, was twice elected president of the Minnesota Baptist Convention pastors’ fellowship, and was a member of the board of trustees of Pillsbury Baptist Bible College in Owatonna, Minnesota.

Frank is survived by his son, David, and two grandchildren.

Services will be held on Saturday, March 5 at Calvary Baptist Church, Wisconsin Rapids, WI, with visitation beginning at 9:30 a.m. and the funeral to follow at 11:00 a.m. Burial will follow the service in Restlawn Memorial Park Cemetery, with full military honors.