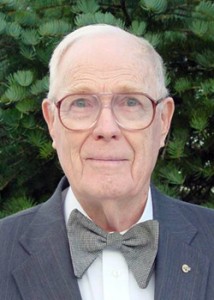 Burdened for Jews, the Ubbinks spent 33 years in Jewish ministry in the Los Angeles area. Using his God-given talents, he was also editor and publisher of Shofar Magazine for 31 years. “Christ is a Light to the Gentiles as well as a Redeemer for the Jew,” he said in “A Stone of Hurt,” published in The Biblical Evangelist. “Without Him, both are lost forever.”

He graduated from Calvin College, Grand Rapids, Mich., with a BA and from Dallas Theological Seminary in Dallas, earning a ThM. He was ordained on Sept. 25, 1950. He was a retired missionary with Baptist Mid-Missions, serving from 1968 to 2002 sent by Wealthy Park Baptist Church in Grand Rapids.

He was preceded in death by his wife, Mary Jane, in August 1998; his parents, Dirk and Ann Ubbink; and a sister, Esther Ballast.

Funeral services were held at First Baptist Church, Creston, Iowa, where he was a member.