Earle C. Harriman, a pastor and school administrator, died March 20. He was 93. 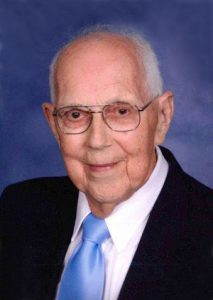 SEBRING, Fla.—Earle C. Harriman, a pastor and school administrator, died March 20. He was 93.

Earle grew up on a dairy farm in Massachusetts. He attended Gordon College, where he met Donnabelle Thompson. They married on May 21, 1950.

Earl’s first pastorate was in two churches at the same time in neighboring communities of Washington, Vermont, until he began attending Baptist Bible Seminary, Johnson City, New York. He then pastored Camden (Ohio) Baptist Church while studying to earn a graduate degree from Case Western Reserve.

Following his pastorates, Earle was a history teacher at Baptist Bible Seminary from 1957 to 1964, and then was a school administrator from 1964 to 1991, serving Capitol Baptist Academy, Washington, D.C.; Heritage Christian School, Indianapolis; and Horseheads (New York) Christian School. He also helped start Twin Tiers Baptist High School, Breesport, New York, in the 1970s. Baptist Bible Seminary awarded him an Outstanding Service Award in 1994.

In retirement, Earle served Maranatha Village in Sebring, Florida, where he lived since 1991, as president of the board of directors and financial administrator. He was a member of Maranatha Baptist Church.

He was preceded in death by a son and daughter-in-law, Stephen and Hope; and three grandchildren.

He is survived by his wife, Donnabelle; a son, Joel, pastor of Faith Baptist Church, Rochester, New York; a daughter, Sarah Smith; six grandchildren; and six great-grandchildren. Joel says that he and Sarah “are blessed to have grown up with and seen modeled the faithfulness of humble Christian servants.”