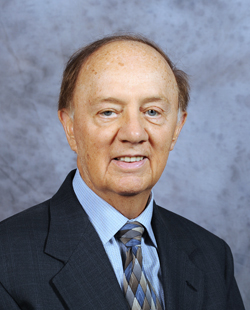 LINCOLN CITY, Ore.—Dr. Reno Hoff, former president of Corban University, joined his Lord and Savior on Nov. 15. Reno, 78, was also a community and church leader, and most significantly, a beloved husband, father, and grandfather who had a deep and abiding faith in Jesus. He was a member of Faith Baptist Church in Lincoln City, where he served with a heart of service and generosity. Reno recently retired from Corban University, Salem, Ore., after 44 years of service. Arriving at Corban in 1969, he was originally hired as a business manager, having attended Northern State Teachers College in Aberdeen, Stockton (Calif.) College, and the American Institute of Banking. He served in the 5th Infantry Division as an army news photographer from 1953 to 1956, and then worked for Bank of America from 1958 to 1969. Corban University reports that when he accepted the position at the university, “he began his work with a new vision.” “I viewed my work here as a ministry and not a job,” he stated. During his tenure, Dr. Hoff went on to become business professor, vice president for administration, executive vice president/provost, and for 14 years, president. Throughout his career he continued his education, earning BS degrees in theology and finance from Western Baptist Bible College in 1973, an MS in academic leadership from the Oregon College of Education in 1978, and an honorary degree bestowed by Western Baptist College in 2000. He also completed certification as a Certified Financial Planner, Licensed Tax Consultant, Enrolled Agent–IRS, Certified Tax Advisor, and Registered Investment Advisor. Serving at Corban was Dr. Hoff’s heart’s passion and calling from the Lord. He described his presidency as the greatest experience of his spiritual life. “Working with people who have the same vision and a common bond in Christ, with a goal to make a difference in the world, is what has made it a rewarding experience,” he said. On July 1, 2013, Corban named him president emeritus, making him only the second president emeritus in the university’s 78-year history. The honor was given immediately upon his retirement. Dr. Reno Hoff is survived by his wife of 55 years, Linda; a son, Rod; three grandsons; two brothers, Harley and Clyde; and two sisters, Shirley Prickett and Phillippine Addington. Interment will be at Willamette National Cemetery, Portland, Ore., followed by a memorial service on Sunday, Nov. 24 at 3:00 p.m. at Corban University Psalm Center in Salem, Ore.
Posted in With the Lord on November 21, 2013.