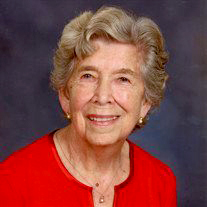 ROCKFORD, Mich.—Dorothy Ritchie, a church-planting missionary, died Feb. 14. She was 93.

Dorothy served with her husband, Wayne, as a church-planting missionary with Galilean Baptist Mission, which later merged with Baptist Mission of North America and subsequently Baptist Church Planters.

Dorothy encouraged and supported Wayne in his role as field director, she served alongside him as they started churches in Michigan and helped other churches that were looking for pastors, and she encouraged, empathized with, and prayed for pastors’ wives.

The couple retired in 1994 after 40 years of faithful service.

She was preceded in death by her husband, Wayne, in February 2004 after 60 years of marriage, and her oldest son, Tom.