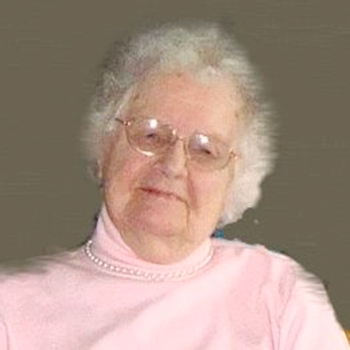 MADRID, Iowa—Doris Marie Leverett, a missionary and pastor’s wife, died on Jan. 15. She was 95.

Doris and her husband, Cletis, were missionaries for 40 years with Baptist Mid-Missions. They were pastor and wife at Bethanna Baptist Church in the Appalachian Hills area of Cornettsville, Kentucky, and in Kodiak, Alaska. After an earthquake and tidal wave hit Kodiak Island, the couple relocated to their home state of Illinois. Cletis became a mission evangelist, while Doris served in their local church, Berean Baptist Church, Bunker Hill, Illinois.

Tim Capon, state representative of the Iowa Association of Regular Baptist Churches, met the Leveretts when he and his wife, Sandy, were living in Ketchikan, Alaska, more than 36 years ago. “Pastor Cletis Leverett was instrumental in our coming to Christ and our call to the ministry,” Tim says. “You never forget the people God used to bring you the gospel. To this day we thank God for these people. There were several people over several years. But Pastor Cletis Leverett and his wife, Doris, will always be special to us.”

She is survived by her children, Cletus, Stephen, Karen Boersma, and Richard; 10 grandchildren; and 21 great-grandchildren.