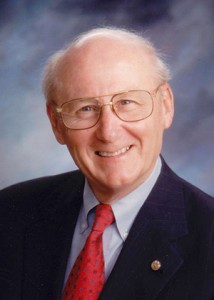 Rickard was born April 3, 1936, in Toledo to Wesley William and Mabel (Caldwell) Rickard. In 1957 he married Margaret “Peg” Stockwell. He graduated from Cedarville College the next year.

In 1970 Rickard became vice president of student life and dean of students at Cedarville University. Following his retirement in 2000, he and his wife traveled for Cedarville, providing college planning seminars and visiting churches and schools. Also in 2000, the Student Government Association established an endowed scholarship for missionary kids to honor the Rickards.

Don often spent time on campus interacting with students and staff. He had a ministry of encouraging others and sharing wise insights to those who sought advice. In 2002 the university honored Don Rickard, along with Dale Murphy and Thomas Younger, by naming a residence complex after them.

Don also valued the local church and spent many years serving as a deacon, teacher and organist. He and his family helped start Shawnee Hills Baptist Church in Jamestown, Ohio.

His favorite verse, Proverbs 23:23, came from a message at Cedarville given by Warren Wiersbe. “Buy truth and do not sell it; buy wisdom, instruction and understanding.” He appreciated this verse because he valued the truth of God’s Word. Don was a man of integrity and lived by the principals established in God’s Word.

Donald Rickard is survived by his wife, Peg; three sons, Don, Brian, and Brad; seven grandchildren; and one great-grandson.

Next post December 2015 E-Info: Wishing You a Messy Christmas!