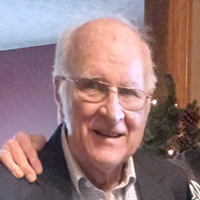 Dick was pastor of Chelsea Heights Baptist Church, Atlantic City, New Jersey (1959–1967); Portville Baptist Church, Portville, New York (1967–1991); and Maple Avenue Baptist Church, Elmira, New York (1991–2001). Alongside his pastorates, he also served on the board of the Association of Baptists for World Evangelism and the Northeast Fellowship’s Council of Ten and Network Leadership Team.

Retiring in 2001, Dick worked at Cedarville University until 2014 and served at his church in many roles, including as chairman of the missions committee and as a deacon.

He is survived by his wife of 61 years, Joyce; four children, James, Becky Lucas, Debbie Konzelman, and Sarah Haldeman; 15 grandchildren; and seven great-grandchildren.