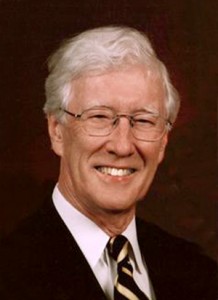 WATERLOO, Iowa—David Moore, pastor emeritus of Walnut Ridge Baptist Church, died Sunday morning, March 27. He was 87. His family had spent the previous night reading and singing together about Easter Sunday and the Resurrection, and Moore would occasionally stir. Then on Easter Sunday at 6:30 a.m., he opened his eyes to see his Heavenly Father’s arms outstretched, welcoming His son Home.

In addition to his pastoral service, David served on the boards of a number of ministry organizations, including the GARBC, Friendship Village retirement living center in Waterloo, Cedarville University, Summit University, and Baptist Mid-Missions. His wisdom, grace, and humility were recognized qualities in these and other venues in which he served.

“David was a prime example of Christlike living and ministry,” says John Greening, GARBC national representative. “His faithfulness in proclaiming the Word of God with passion and gentleness caused him to be viewed as a model of loving pastoral care.”

“Pastor Moore is rejoicing now in Heaven,” Tom Hlad told his congregation March 27. “He is where he wanted to be, and we praise God for the Resurrection and the hope we have that one day we will be reunited with our loved ones.”

“It is ironic that Walnut Ridge lost two former pastors, Mark Jackson and David Moore, just a few days apart,” Greening says. “God bless Pastor Tom Hlad as he carries on the legacy of making Christ known through the church. Tom and his wife, Christine, are in our prayers as they and the church family move through the farewell and tribute events of the next few days.”