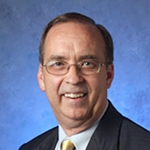 Daniel Morrell, a former GARBC pastor and professor at Northland International University and Pillsbury Baptist Bible College, passed away on Dec. 9 after a brief bout with liver cancer. He was 59. He was born on July 16, 1953, in Berea, Ohio, where he was saved under the ministry of Berea Baptist Church. After marrying his wife, Diane, and graduating from Baptist Bible College, Clarks Summit, Pa., in 1975, Dan became youth and music pastor of Griffith Baptist Church, Griffith, Ind. (1975–1978). While studying for a MRE at Baptist Bible Seminary, he served as part-time youth, Christian Education, and music pastor of Baldwin Heights Baptist Church, Jenison, Mich. (1978–1981). Later he was youth and Christian Education pastor of First Baptist Church, Lapeer, Mich. (1981–1986), then family ministries pastor of Bethel Baptist Church, Cherry Hill, N.J. (1986–1991). He was ordained by the Cherry Hill church in 1987. Dan was keenly interested in international missions and took 20 teaching trips to various mission fields. He taught in the ARRIBA program for Baptist Mid-Missions, served as a short-term missionary to Israel, hosted tours of Israel, and taught Chinese house-church pastors. The Morrells were sent by Calvary Baptist, Fair Haven, N.Y., during their years of missionary service, from 1991 to 2001. Dan later served as international coordinator for Shalom Ministries from 2007 to 2009. The family moved to Owatonna, Minn., in 2001, where Dan was hired as a professor of pastoral ministry courses at Pillsbury Baptist Bible College. He also developed a course on Bible geography and earned an MA at the Baptists for Israel Institute, HaEmek, HaYarden, Israel. When Pillsbury closed in 2008, he was hired by Northland International University, where he taught on the faculty and earned a DMin degree. He is survived by his wife, Diane; his children, Matthew (Kimberly) Morrell and Julie (Trevor) Falls; and six grandchildren. His son, Matthew, is the pastor of Fourth Baptist Church, Plymouth, Minn., where the funeral service was held.