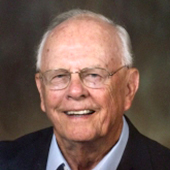 Cliff began his career in education by serving as a teacher and administrator in his home state of Washington. After completing an EdD at the University of Washington in 1962, he joined the administrative staff of Cedarville University. He served as registrar, director of admissions, academic vice president, and assistant to the president. He retired in 2003.


Prior to his career, Cliff was a pilot with the Army Air Corps. He trained to fly the P-61 night fighter, also known as the Black Widow. Based in the Philippines, these planes flew night missions as protective escorts for battleships and carriers operating in that part of the Pacific. Cliff enjoyed his service experience and later was active in the 13th Army Air Corps Veterans Association and served multiple terms as president.

Cliff was preceded in death by his first wife, Eunice, after 46 years of marriage.

He is survived by his wife of 24 years, Pamela, a longtime professor at Cedarville University; two children, Tim Johnson and Merilee Shank; three grandchildren; and six great-grandchildren.