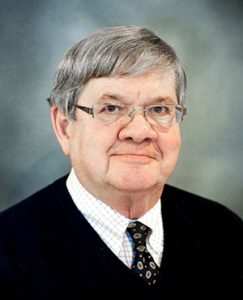 Before going to Clark Summit University and Baptist Bible Seminary, Arp served as a youth pastor at Faith Community Church in Roslyn, Pennsylvania, and Berachah Baptist Church in Bridgeton, New Jersey. He also taught at South Jersey Evening Bible Institute. According to the BBS website, Dr. Arp’s knowledge of Greek text, the Greek New Testament, and the English Bible, as well as his skill in exegesis, was instrumental in developing the Greek program at CSU.

David Gunn, editorial director of publications at Regular Baptist Press, managing editor of the Baptist Bulletin, and doctoral candidate at Baptist Bible Seminary, says Dr. Arp was an incredible scholar and professor. In his many decades of teaching New Testament Greek, he studied deeply, wrote extensively, and kept himself conversant with all the major issues on the cutting edge of Koine Greek research. Yet with all his learnedness and scholarly acumen, he will no doubt be remembered most for his gracious manner toward and genuine care for his students. “It was a delight to study under Dr. Arp,” Gunn says, “not just because he knew what he was talking about and could communicate it well, but because you could tell he actually cared about you. That’s a rare quality, and it’s what makes the difference between a good teacher and a truly great one. Bill was one of the latter, and all who had the privilege of knowing and learning from him are deeply grieved by his passing.”