Alice Humrickhouse Messenger, a pastor's wife, died May 10. She was 86. 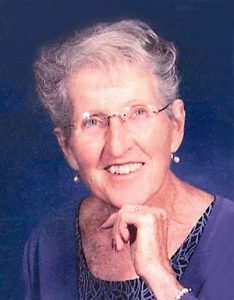 SEBRING, Fla.—Alice Humrickhouse Messenger, a pastor’s wife, died May 10. She was 86.

In 2003, the couple retired and moved from Ankeny, Iowa, to Sebring, Florida, to live at the retirement community Maranatha Village.

Robert died in May 2006, and in February 2008, Alice met Donald Messenger, whose wife, Marjorie, had also died in 2006. Alice and Don married in May 2008 and continued to live in Maranatha Village and serve at Maranatha Baptist Church in Sebring.

Alice was known as a faithful and cheerful encourager, particularly to John and Daria Greening in their roles with Regular Baptist Churches as, respectively, national representative and executive assistant. Alice regularly wrote notes to the Greenings, letting them know she was praying for them.

“Alice’s life reflected her Christian faith with remarkable consistency,” Daria says. “When John and I first began our ministry to the churches in the association, Alice began praying for us. Not only did she support us in prayer, she encouraged me personally through sending an uplifting note every month on a handmade card (more than 240 notes in all!). She was a wonderful sister in Christ!”

Alice was preceded in death by her first husband, Robert Humrickhouse.