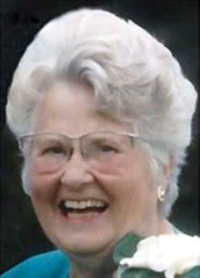 Adelaide and her husband, Harry, married on Aug. 6, 1945. She attended Moody Bible Institute with Harry as they prepared for the mission field. And while he completed his medical training, Adelaide, who had earned a teaching certificate from Western Normal College (Western Michigan University) in 1940, taught school.

Together Harry and Addie served as missionaries for three years in Belgium and five years in the Congo of Central Africa. In a village of the Congo about 200 miles from the nearest city, they built the desperately needed Maranatha Memorial Hospital literally with their own hands. A structure was already on the hospital’s property when the Zemmers had arrived, but the rest of the facilities were constructed with bricks handmade by the Zemmers and locals.

The Zemmers had finished building a 16-bed maternity ward, operating room, and X-ray department when rebel soldiers began rioting in the Congo in 1960. That year marked the beginning of a five-year period of political upheaval and violence in the turbulent country. Fearing for their lives, Harry and Addie, with their four young children (then 13, 10, 3, and 8 months), fled their home carrying only a single suitcase and began a daylong journey of pushing their car through the jungle to escape the area.

“Soldiers passed us on the roads, but because the Belgians had confiscated their ammunition previously, they offered no resistance,” the Zemmers told the Benton Harbor, Michigan, News-Palladium in 1960. “We finally reached Kumbia, a camp of 158 evacuating missionary families, along a river at the border of Usombura and Ruanda-Urundi, where we obtained supplies for our return to America.”

Arriving in the U.S., the Zemmers stayed with Addie’s mother in Watervliet, Michigan, while they started over. In 1965 the couple established a medical practice in Lapeer, Michigan. They remained in Lapeer for the next two decades but did eventually return to missions. Soon after retirement in 1989, they served as short-term missionaries at missionary hospitals in Africa and Bangladesh.

Throughout her life in Lapeer, Adelaide was active in her community and church. She was a Bible teacher, youth worker, choir member, children’s choir leader, and ladies’ ministry director at First Baptist Church in Lapeer. She was also an active member of the Lapeer County General Hospital Auxiliary Board. In 1999 she moved to Mattawan, Michigan, where she lived for the last 17 years.