Welcome to the Ministry 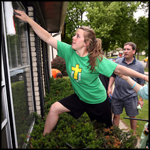 SCHAUMBURG, Ill.—Twenty-seven teens and youth sponsors from Iowa got a taste of church planting in Chicago last week as they fanned out across two communities in the western suburbs seeking to make new contacts through random acts of kindness.

The teens, from Faith Baptist in Cambridge and First Baptist in Creston, came for a weeklong missions trip to help Scott and Brooke Greening, who are trying to launch Great Commission Baptist Church in 2010.

Armed with brushes, brooms, squeegees, a leaf blower, and piles of church contact cards, the teens spread out across Schaumburg on Tuesday going house-to-house offering to wash windows or sweep driveways for free as a gift from the church.

Unlike “friendly Iowa,” the teens didn’t get a very warm reception at first. Many people were probably at work, but many more obviously chose not to come to their doors. The bell would ring, a dog would bark, the blinds would twitch, but no one appeared at the door­.

Over time, the law of averages caught up with the teens. Residents who accepted the offer often blinked in disbelief at the contact card, looked up at the smiling teens, and asked, “Free?”

A man from India who spoke no English stood outside holding his card as three girls washed his windows and a boy swept his driveway. His 20-year-old, English-speaking son was leaving for work just as the group was finishing. He asked why they were doing this. “Very cool,” he said as he took a card. “That’s a great idea.”

A housewife from Brazil named Maria got her windows washed, weeds pulled, and driveway and walks swept as two groups of teens converged on her house from different directions simultaneously. She agreed to have her picture taken with them. “I think I would like to visit this church,” she said before thanking the teens.

While most homes missed out on the blessing, many great contacts were made by the end of the day. Some people even said they would be willing to open their homes to host a neighborhood Bible study.

On other days, the teens performed different acts of servant evangelism. One day they helped people with their carts at a neighborhood grocery store. Another time they gave away free bottles of water and cleaned windows at a gas station. One man read the contact card and said he wanted to attend the new church the next Sunday. When Scott Greening explained that Great Commission Baptist wouldn’t be ready to launch until next year, the man agreed to meet with Scott over tea in the meantime.

Another man, who called the phone number on the contact card attached to a water bottle, said he thought that the Lord no longer loved him, but the card reminded him that God does love him and wants to have a relationship with him.

One day the teens canvassed the target areas and conducted home surveys, asking residents about church and their spiritual life. Twenty people who responded said they would be willing to participate in a Bible study to learn more about having a relationship with God.