Jim Vogel, associate national representative of the GARBC, and his wife, Jeannie, spent two weekends in October ministering to churches in southeastern California. 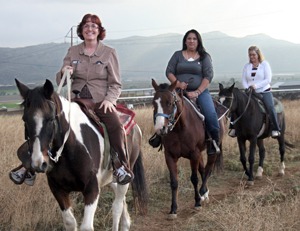 SOUTHERN CALIFORNIA—Jim Vogel, associate national representative of the GARBC, and his wife, Jeannie, spent two weekends in October ministering to churches in southeastern California. Jim began his ministry with a men’s retreat hosted by Victory Ranch, Moreno Valley, where he shared his Mythbusters series and the men enjoyed skeet shooting, horseback riding, and good food. That Sunday Jim spoke at two churches in Gardena, near Los Angeles: South Vermont Baptist Church and Calvary Baptist Tabernacle. The next weekend, Jeannie spoke on “Leadership Lessons from the Life of Moses” at a ladies’ retreat hosted by Victory Ranch. The women who attended were treated to horseback rides, painting classes, and a silent auction. That Sunday, Jim and Jeannie traveled to the Good Samaritan Christian Baptist Church in National City, where Jim preached. 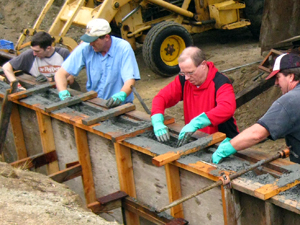 During the week between the retreats, the Vogels helped Victory Ranch Director Paul Cayot lay cement for one of the sidewalks that run through the vast ranch areas. In addition to their ministry, Jim and Jeannie enjoyed fellowship with those they met. They spent time with Harlan and Sylvia Gaston, pastor and wife of South Vermont Baptist Church, and with James and Sharon Solomon, pastor and wife at Calvary Baptist. At the Good Samaritan Christian Baptist Church, the Vogels shared warm Filipino fellowship with Pastor Evie Lamitar and his wife, Avelina.
Posted in News on December 3, 2010.