TFC: All in the Family

DEARBORN, Mich.---It’s a family affair—or something like that—at the 2013 National Talents For Christ Group Competition. The event began Wednesday afternoon at the GARBC Conference, where several siblings performed together. 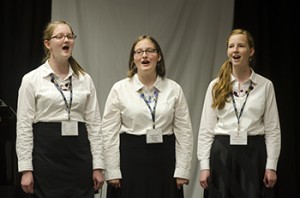 DEARBORN, Mich.—It’s a family affair—or something like that—at the 2013 National Talents For Christ Group Competition. The event began Wednesday afternoon at the GARBC Conference, where several siblings performed together.

The Nicholson sisters—Sarah, 17, Kathryn, 15, and Heather, 14—from First Baptist Church, Great Valley, N.Y., performed two a cappella songs for the TFC competition. They agreed that they learned both music skills and people skills as sisterly tensions were bound to occur while training together for this event.

“We would have those problems,” Kathryn says. “but we live in the same house. We had to get back together at some point!”

“It did bring us closer together,” Sarah says. “It helped us with learning when to say something . . . when it would be a good idea to give constructive criticism.”

Not to mention Mom Nicholson sat at the piano providing beginning notes (and moral support) for the girls. 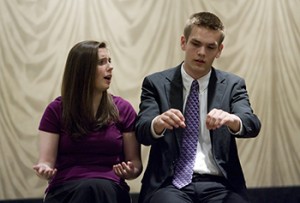 “The organic family and the church family are analogous,” Dr. Kauffman says. “Everything starts with the family. . . . When you see families doing something together, that’s a good thing.”

A group from Emmanuel Baptist Church, Naperville, Ill., also presented a skit in the drama category. Judging the drama category were Kim Williams, a Talents For Christ alumnus, from Amherst, Ohio, and Bonnie Parker from Elyria, Ohio.