LITTLE EGG HARBOR, N.J.---Fourteen teens, three leaders, and one youth pastor from Calvary Baptist Church boarded a plane in Newark and set off for the Netherlands. 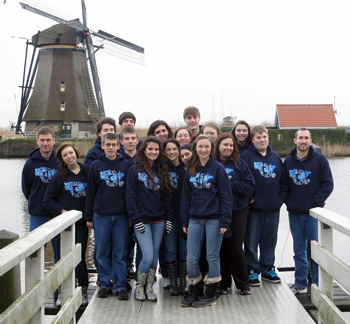 LITTLE EGG HARBOR, N.J.—Fourteen teens, three leaders, and one youth pastor from Calvary Baptist Church boarded a plane in Newark and set off for the Netherlands on Dec. 27. After a year and a half of fund-raising, planning, and practicing, they were on their way to meet three generations of missionaries in Holland whom Calvary Baptist supports: Herb and Madeline Boyd, David and Crissie Boyd, and Daniel and Heather Boyd. Youth Pastor Bryan Murawski says the trip idea came about when David Boyd, on furlough in 2011, observed the teens’ missions trip presentation at church after their trip to the Dayton Gospel Mission in Ohio.

The group’s week in the Netherlands was packed with performances, evangelism, fellowship, and sightseeing. The main evangelistic thrust came from an hour-and-a-half performance by the teens—performed three times in separate locations around Holland—that included skits, wordless dramas, puppets, illusions, live music, testimonies, and a “black light hand drama.” Murawski himself wrote the script, focused on the theme of forgiveness.

To encourage visitors to come to the performance, the group created flyers with an invitation on one side and a gospel tract on the other. Murawski says, “We handed out several thousand of these flyers, canvassing neighborhoods and handing them personally to people around shopping areas. It was exciting to our teens to know that thousands of gospel tracts went out, as well as thousands of invitations to their performances. The performances were also advertised through the churches we were partnered with, and in newspapers and even a television ad or two.”

The group from Calvary partnered most closely with Evangelical Baptist Church of Veghel, enjoying fellowship around Dutch food and a hymn-sing with the congregation. In the end, about 100 people, many of whom were unbelievers, attended the performances. “The Boyds assured us that even though it didn’t seem like a lot for us, to have any amount of unbelievers come to something so ‘religious’ was astounding,” Murawski says. “The teens did a good job interacting with many of the Dutch people after the performances as well.”

To truly experience the Netherlands, the group ate as many Dutch goodies as possible, visited some windmills, and spent a day in Amsterdam, which opened the teens’ eyes to the culture they were ministering to. On New Year’s Eve they Skyped their families and friends back at the church; the group in the Netherlands celebrated the coming of the New Year while the people at the church “celebrated” the coming of 6:00 p.m. in the U.S.

The trip concluded with another eight-hour flight back home on Saturday, Jan. 5 and a presentation to the church family the next day.