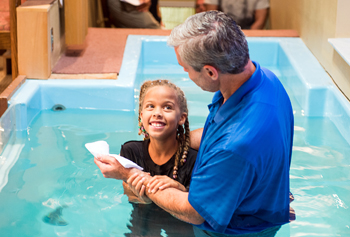 WINTER HAVEN, Fla.—It took three associate pastors to do it, but it got done: on the last Sunday in September, Faith Baptist Church baptized 28 adults, youth, and children. Nine of those baptized had been saved at FX Camp in August.

At the beginning of , members of Faith were challenged to join special prayer groups to pray for a list of “big prayers” for three months. One of those big prayers was to see 100 baptisms this year. At the close of the Sept. 30 baptismal service, Pastor Nate Osborne mentioned that with the 28 baptized that night, the total for the year is near 80, for which he praises the Lord.

Many of those 80 are children and teens saved through the church’s Faith Extreme/FX ministry to students in a depressed Winter Haven neighborhood. Sean Fielder, director of FX, baptized eight of the “FX kids,” asking them, “Do you believe that Jesus died, paying the full price of your sins, that He was buried and that He rose again? Have you asked God to forgive you and have you received Jesus as your personal Savior? Do you promise before God and before this church that with the power of the Holy Spirit, you will strive to live the rest of your life according to God’s Word?”

Sean says, “As I put them under and brought them up, it was a powerful reminder that they really did pass from death to life. These kids show amazing courage by publicly identifying with Jesus and making their decision to follow Him in a public way.” Sean also baptized a married couple.

Sean says, “These kids are more than just numbers to proclaim from the pulpit on a Sunday morning. They are now children of God, going back into a world that will hate them just as they did Jesus. They have committed to ‘live the rest of their life according to God’s Word,’ so this means we, as a church, have a responsibility to teach them what that really means. Satan is so angry that he has lost his power over their lives and will be relentless in attacking these new Christians. They need to be taught to recognize and repent from sin, seek to do the good that God has planned, communicate daily with God in prayer, make Bible study a regular part of their life, and always rely on the power of the Holy Spirit, not on their own resolve, to stand strong till the end.”