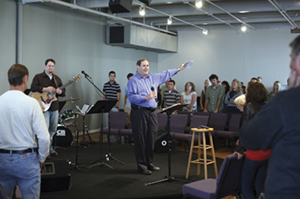 Ken Davis opens his seminary class with a review of possible church planting methods. “There are at least eight different ways to plant a church, and several of them are viable models for us to use,” he tells the students.

Baptist Bible Seminary offers students an M.Div. degree with a church planting concentration. The program is structured so that class time is balanced with the practical experience of actually planting a church while still in seminary. Later in the week, after the midweek church meetings, Ken will hold an informal mentoring session with all of the church planters, some of whom have already graduated from the seminary.

The program was named Project Jerusalem by Dr. Howard Bixby, the recently retired dean of Baptist Bible Seminary. A year and a half after the program started, Ken Davis joined the faculty BBS. Since then, the program has become a unique partnership between the seminary, many of its students, and the local churches who sponsor the church plants.

Ken is still considered an active-duty missionary (“on loan from Baptist Mid-Missions,” is the way he describes it). Before moving to BBS, Ken and his wife had assisted with two church plants in the African American community of Indianapolis. During this time he also served as a missions professor at Baptist Bible College of Indianapolis (now Crossroads Bible College), a school specializing in training leaders to reach multiethnic urban America. Ken has discovered that many of the urban problems he encountered as a church planter are the same problems that plague the smaller towns in northeast Pennsylvania.

The north end of the Lackawanna Valley seems about a hundred years past its prime. Carbondale, Pa., was the site of the first underground mine in the U.S., and the valley was a center for the anthracite coal mining industry in the early 1800s.

“When the coal mines shut down, the economy never recovered,” says Ken Davis. So on the way to church we drive past the slag heaps that serve as both as landmarks and historical markers.

Pastor James Schmidt started a Bible study here in 2001 while he was still in seminary. He grew up at First Baptist Church, Marilla, N.Y., which later commissioned Pastor James and gave the church plant significant support. Most of the Project Jerusalem churches use a mother-daughter church planting model, where seminary students partner with local churches and sometimes mission boards to begin new works.

Ken Davis believes the partnering relationships are necessary because the work can be difficult. “In Northeast Pennsylvania I could take you to dozens of country churches that are struggling,” Ken says. “Baptist Bible Seminary is strategically located in one of the neediest areas of the country—spiritually needy.”

The proximity to the seminary gives church planters another resource: qualified lay workers who are passionate about helping. Tom Pollock was director of student financial services at BBC before he retired. Now he describes himself and his wife as “old folks starting over.”

“I’m 73, and we’re at the end of our ministry years. I’ve been a Christian school administrator and an associate pastor, but I’ve never helped with a church plant before,” Pollock says.

A few church members stand outside the door of a brick warehouse on a glorious fall day in Scranton, Pa., greeting visitors as they enter. Built as a silk mill in 1919, the building has seen life as a trouser factory, sportswear manufacturer, and floor covering company. The church rented and remodeled the second floor, and the church has the vibe of a trendy downtown loft: wood floors with lots of character, exposed brick and ductwork, and huge windows that face the street.

None of the Project Jerusalem churches own their own buildings yet. Ken advises churches to lease facilities for as long as they can.

“Churches can place a much larger percent of their budget to pastoral salary and evangelism, rather than spending it on buildings,” Ken says.

New Life Baptist has been sponsored by Heritage Baptist in Clarks Summit, Pa., the church that sits just across the road from Baptist Bible Seminary. And many of the seminary staff and students are present during the morning service.

Mike Stallard, dean at Baptist Bible Seminary, begins the service with a simple greeting. “I don’t know why you came today, but God has lasting answers to all of life’s problems, and we can find these answers in the Bible,” Stallard says.

The church has carefully implemented a team approach to ministry. The sermon is given by another seminary professor, Mark McGinnis. Another benefit to the seminary’s informal sponsorship becomes apparent: the young church has the benefit of a larger staff without the burden of funding multiple salaries. Currently, the only full-time staff member is Dan Price, who leads the morning worship time.

In almost every case, Project Jerusalem has planted churches that are Baptist in name. One church graduated from the program and changed its name (“We have to respect the autonomy of a local church,” Ken says, “but that sure didn’t excite us.”)

Later in the week, Ken returns to the once classroom, this time to meet with a group of seminary students who are planning the first public service of a church in nearby Marshall’s Creek. Flyers for the service announce “Our Grand Opening Celebration Service,” which was planned for an elementary school auditorium. Project Jerusalem has contributed about $20,000 toward the costs of starting the church; more than 150 people would attend the first service on Oct. 5, 2007.

See a gallery of photos for Project Jerusalem at www.Baptist Bulletin.org.